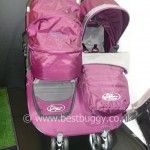 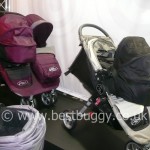 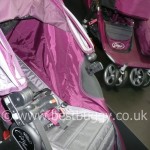 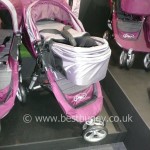 With the carrycot hood up, your baby is totally covered. 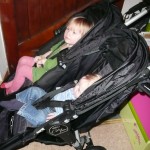 My son is sat where the seat is normally ie like the 2010 version. My daughter has the strap put on and it pulls the seat much further forward and upright. 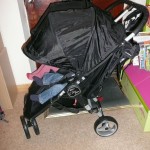 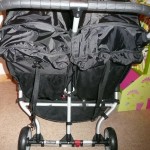 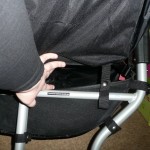 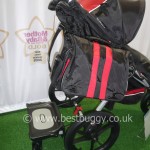 I bought my first Baby Jogger City Mini Single only a couple of months ago. On its first ever all day outing it proved itself as a fab compact pushchair. As a result I promptly ordered the 2011 Baby Jogger City Mini Double…or so I thought….because the 2010 arrived! Eventually I got it swapped, but by this point I had seen both the 2010 and 2011 versions to be able to comment on the improvements.

There are several main differences between the 2010 and 2011 versions, apart from the new colours! The two most important to me were the addition of a PE board in the back of the seat to make it less hammock like and flat for the child to lie on. It cost me approx £30 to get one of these for my single City Mini. The second was the reason I really needed the 2011 version. That was for the sit-up straps which make the seat sit more vertical than the 2011 version. My daughter likes being sat upright and in the 2010 single version wouldn’t sit back in the seat – not that it mattered as the single is for my baby son – but as a double she needed to be comfy. However I hunted around for these amazing sit-up straps to find a bit of velcro webbing sewn at the back of the seat and after about 40 mins of grappling with velcro, frame, hood, I eventually had the strap put correctly in place with the hood sitting correctly on top. I have to say, once it was on, I wasn’t undoing it again!! But TBH these improvements weren’t paying the extra for – I am sure I could have done the same with a needle and thread, and a piece of cardboard in the back of the seat. However the BIG improvement to the City Mini is the ability to take a parent facing carrycot. We saw these in situ at the Harrogate Nursery Fair and they looked very good and very sturdy. We especially loved how with the hood of the carrycot up, the hood on the Single City Mini came down over the top to totally enclose the baby inside. No more putting a blanket over the hood if you have a baby who likes it to be dark when sleeping! However you aren’t able to do this on the double version as you have to remove the hood to slot the two slim adaptors into the hood sockets. It is because you have to remove the hood for the carrycot, that the BJCM now has two separate hoods instead of two on one bracket. My only niggle with this is that the back of my City Mini looks like velcro / strap city with bits and pieces everywhere even without a cosy toes attached. It’s these hood straps that makes the sit-up strap hard to affix quickly – or maybe I just need to practice lots??? The carrycots RRP is £119.99 – which for twins does add a hefty chunk onto the cost of this pushchair. To date we have always suggested using a Petit Zia or Graco soft cot, wedged in by a belly bar, as a parent facing baby option. I personally like my son strapped into the harness and so I have been using a Bugaboo Cocoon which has slits for the harness to side through at the back for easy removal. All these options are substantially cheaper for what is a maximum of six months use. The carrycots arrive around June 18th 2011.

I love the quality of all my Baby Jogger Pushchairs. I adore the huge hoods – I haven’t used the raincover yet on either City Mini. The hoods are so roomy. Even my tall 2 year old has masses of room to grow! The fabric is great. The seats are comfy for my children. My City Mini pushes easily although I have to say the fixed handle has taken some getting used to and its not entirely comfy for my height (5ft 6ins). It’s a shame there isn’t an adjustable handle. But with two children in, its easier than my Baby Jogger City Select to push.

I love the little features – the one handed squeeze down strap to lower your child silently and smoothly to whatever recline position you wish. I love the roll down flaps for when your child is laid flat to give them protection in winter, or the mesh for ventilation in summer. I like the two peekaboo flaps on the hood although I wish these were held down with magnets like the City Select because ripping two piece of velcro per flap isn’t very quiet! The brake is easy to use. The five point harnesses are easy to open and adjust. However hubby and I don’t like the way the harness threads through so as you pull one end, the other disappears on you!  But BEST of all I love the easy fold mechanism. You grab the two handles in the centre of the seat and the whole system folds up really easily!

However I do have two niggles….for me they are big ones and could well mean I sell my City Mini double in favour of the Mountain Buggy Duet. But I have to be fair here. Although the City Mini at 75cms wide DOES fit easily through a standard doorway, I live in a small seaside town and I am struggling to get into the shops here. Even in the biggest supermarket I keep catching the wheels on the stands as I go up and down the aisles. But for most people this wouldn’t be an issue. What is a bigger issue is the shopping basket. It is a fabulous sized basket but access is absolutely appalling! Thankfully I use Pacapod changing bags and they do fit through the side gap with a good push. But for every day shopping the basket is hopeless. I have to stand outside the supermarket and individually post every item through the gaps below and at the side of the seat in order to get my shopping home. Once I get home, I have to unthread everything back out again and into the bags to take into the house. I did hang somethings on the handlebars (not recommended) but it did make the pushchair rock more as I walked along than when I do this on my City Select. I have to say I haven’t used my City Mini for shopping since. It’s a good pushchair to take to the park though and the net storage on the back of the seat takes plenty of drinks, snacks, books and toys without needing the underneath basket. A more minor niggle is the amount of straps with poppers underneath the frame. I know the two orange ones are safety straps which have to be put on and off each time you fold and unfold the frame…but the other four along the basket just limit the access to nigh impossible at the back!

I like pushchairs with a small fold. When the City Mini arrived the slim box really excited me. However with the wheels on, the fold is relatively chunky – not huge though – and to be honest its quick and easy to pop the wheels off to fit it in the car or slide it away out of sight somewhere. It took help to locate the storage strap way underneath the seat! The last photo with the yellow circle shows where the storage strap if. It is usually well underneath the seat and velcroed together to start with.

You can get adaptors for a Maxi Cosi infant carrier. However I took one look at the instructions on the Baby Jogger website and it looks a nightmare to remove the fabric to attach the bracket. I admit I haven’t tried, but someone else I know who has had them said the car seat once in situ looked daft anyway. I wish there was way to attach a car seat to the double as easily as to the single because I use my single most of the time for the car seat to fit onto. I like to be able to switch between having the car seat on and using the seat for my son depending on what we are doing. I may be wrong but I think it would be harder to do this with the double City Mini.

The photos above also show the fabulous new cosy toes for the City Mini pushchairs. I believe the retail price is around £40 which is great value for something with a lovely fleecy lining and matches the pushchair so well. I have to say I may well get one for my single. There is also a photo showing the new Glider board (buggy board for a toddler up to 45lbs) and the wonderful changing bags which affix onto the side of the pushchair with a bar. Very clever! Although I have heard reports of some of these breaking.

All round I have to say I think the Baby Jogger City Mini is a cracking side by side pushchair that should see you easily from birth to age 4/5. It takes a combined weight load of 100lbs which is a good sized pre-schooler. It is the only side by side already on sale that did tempt me to buy and my husband liked the continutity between single and double for our baby son so he was always in familiar surroundings in a similar pushchair. But I have to say I am not as in love with the double version as I am the single, and the problems I have had just underlined that for me.