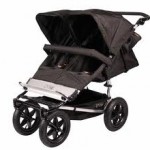 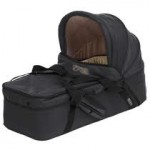 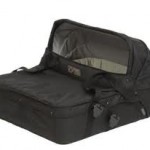 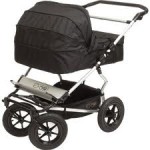 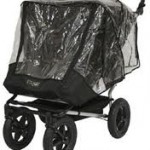 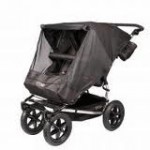 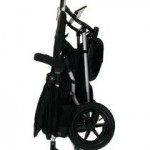 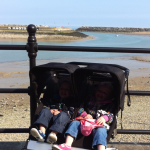 When researching on the internet for reviews of good double pushchairs, the Mountain Buggy double was always mentioned.

I’d never seen a Mountain Buggy double pushchair in the flesh but had heard great things about them. Based on this I decided to take a chance and order one, I’m delighted to say that I wasn’t disappointed!

The Duo fabrics were quite different to the originals, the seat backs were taller and the one piece double hood was replaced with two separate ones – this was an excellent update as these gave greater sun coverage. As well as being bigger and taller hoods, they also had handy flip out sun visors. As soon as I was able to I upgraded to the newer versions, I didn’t want to miss out on those great new features!

The 4 large air tyres on the Mountain Buggy make the ride so comfortable, despite being a little heavy to lift, it is unbelievably effortless to push. We were amazed at this when we took it on its’ first outing and anyone that has ever had the pleasure of pushing it always says the same thing. Friends and relatives have openly admitted that they were fully expecting it to push like a tank, they were all pleasantly suprised!

The fold is simple but a little bulky, although I can easily fit mine in the limited rear space of my people carrier with all the seats up and in use. Folded size shouldn’t be a problem for most people but it’s probably best to check dimensions first if your luggage space is on the small side. Both rear wheels are quick release for a more compact fold and it literally takes seconds to do. The front wheels can also be removed but they need to be unscrewed from the wheel housing first, which obviously takes a little longer. Once folded, the pushchair can be kept shut with the handy transport clip, this is on a strap located on the handlebar.

The handlebar is height adjustable, which is brilliant. I’m only 5ft 4″ but I am able to push this with no problems, in the same way my 6ft husband can adjust the handle to a more comfortable height for him and walk with ease.

It is an all terrain pushchair so rides over any surface, shopping centre, cobble stones, sand, park, beach or muddy field, it can do them all with ease! The best bit is that regardless of whether I had my young twins in the seats, or a baby in one seat and my toddler in the other, it didn’t make any difference to the push, the weight was evenly distributed and didn’t feel heavier on one side than the other at all.

The seats recline independently by means of a strap recline, from lay flat all the way to upright.
There are two straps on each seat unit and you pull or release both straps to alter the recline. The seat units are suitable from birth but you can also purchase a single or double sized carrycot to use in place of the seat unit if you wish. For a toddler and a newborn you can have a single carrycot one side and a seat unit on the other and for twins you can have either two single carrycots in place or a double carrycot also fits on by removing the central bar.

Sold separately, the weather covers (both sun and rain) are the best type of weather covers I have ever used. They attach securely to the pushchair and both have a fantastic zipped central panel which can be rolled up to allow you easy access to your children without having to remove the covers completely.

The basket is a great size and I can get loads of shopping/equipment in there without any problems, there are also 3 pockets at the front of it which are very handy too. Two of these are mesh pockets, which I use for the childrens’ cups, and the third is an enclosed zip pocket, which I keep my keys, phone, etc, in. There’s also a Mountain Buggy fabric bottle holder included which is attached to the frame, this is great for my bottled drink.

Ideally I’d love Mountain Buggy to add some extra storage places, maybe some pockets on the seat backs and hoods or possibly a Mountain Buggy parent console available for the handlebar. It would be great to have some more easy reach places to put hats, sunglasses, or suncream and also somewhere to store little snacks etc, for the kids.

I feel that this is an excellent choice for an all terrain double pushchair. It’s incredibly well made, very comfortable for your children and in my opinion it’s a very good investment for your growing family.