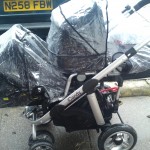 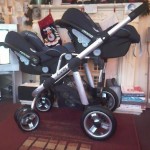 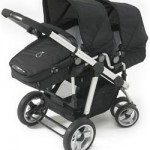 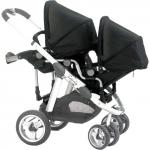 I bought the iCandy Pear at the end of december 2009 for my expected twin boys.  I hadnt expected to like the Pear but when i went to the Manchester Baby Show in the november of 2009 i totally fell in love with it.

My husband and I agreed the iCandy Pear would be great for the 1st year for our twin boys after which we wanted to move onto a side by side which would suit our needs with toddlers.

We bought the full iCandy Pear twins package- 2 seats, 2 cot fabrics and 2 car seats and adapters plus 2 raincovers and a wheel pump.

I totally loved the flexibility of the whole iCandy Pear travel system.  When my twins were small we used the cots for doing the school run so the boys could sleep through it.  We added on a lascal maxi board to it for my then 4 yr old who has mobility issues.  It was beautiful.  Always turned so many heads, was easy to push up and down kerbs etc.

Once the boys were more alert, and bigger at about 3-4 months we moved onto the maxi cosi cabrio fix car seats which snapped onto the pip converter.  I liked that i could alter their view- both facing me, both facing world or both facing each other in this mode.

The boys turned 5 months and we began to use the seat units with some padded seat liners.  My 4 yr old sons health issues often meant full days at Birmingham Childrens Hospital so the boys were comfy and laid down in the seat unit able to nap.  Again easy to push, comfortable for the boys and always attracted attention.

Once the boys reached 10 months we decided to move them to forward facing car seats and also swap over to the side by side we had discussed at the beginning.  No issues with the iCandy Pear itself.  I still loved it, but our needs had changed.  I walk a LOT and i wanted something with bouncier suspension and a better view for them both.

The iCandy Pear has a fantastic extending handle which is easy to use for the taller or shorter parent.

The seats, adapters, pip converter and car seats were all easy to use and easily removeable for putting in the car.  The 2 seat units have to be removed for folding but neatly stack inside each other.  The rear or lower seat is smaller than the main upper seat and not really suitable in my opinion for a child over 18m of age.  The main seat will probably last a little longer.  Perhaps up to 2 yrs or a little longer.

In summary, the iCandy Pear is a perfect travel system solution for new born twins or for siblings very close in age.  Less suitable for children 18m+ and a newborn as its usefulness isnt as long lasting.