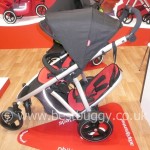 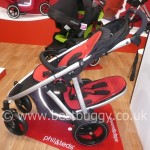 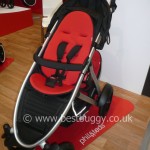 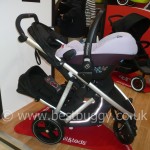 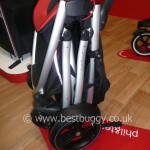 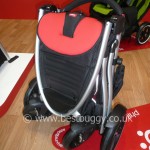 The first thing that hits you about the Phil & Teds Verve is just how striking it is. It is one very good looking pushchair!

I have to confess at this point that despite being a bit of a pramaholic, I have never owned a Phil and Teds. When I discovered I was pregnant with Baby No 2, after scouring various websites I decided that I really wanted a Vibe. But in my pregnant state, I really struggled to lift the Vibe and was totally put off buying one. However the stats of the Vibe are actually very comparable to other tandem pushchairs. So I was a bit put off initially when I was told the Verve was 13.5kg which is 1.5kgs more than the Vibe which was a bit off putting for a pushchair thats significantly smaller than its big brother. The first obvious difference is the additional front wheel which makes the Verve a 4 wheeler buggy. I am not a fan of 3 wheeled pushchairs so having the extra fourth wheel for extra stability is a plus with me. The air filled tyres are 10 inches at the front and 12 inches at the back. It apparently has a good spring suspension for a smoother ride.

The second feature that was pointed out is that the doubles kit back seat reclines unlike the Vibe. This really is an improvement especially as the rear seat is the one most likely to be used by a baby or young toddler who is likely to fall asleep. What to do with the baby when it was too big / bored in the tucked away cocoon was a big flaw on the Vibe. It is easy to recline one handed – very smooth! Although the photos don’t show a hood on the back seat, I have in my notes that there will be two hoods.

Unlike the Vibe, the Verve will take a car seat adaptor and a doubles kit at the same time. As you can see from the photo a Maxi Cosi Pebble fits onto the frame, so I assume the Cabriofix will fit too. You can also fit the Phil & Teds cocoon, bassinet on too, or of course have it in one child or two children modes with the addition of the doubles kit. Options are:

But the feature that I love the most is the fold. It seemed so simple to push the second seat upright and watch the whole pram just simply fold away into a lovely neat package. I could have watched the fold alone for hours! I have to say the small neat, tidy package of an automatically locked freestanding pushchair that I was presented with at the end was probably enough to sell one to me! After the City Select and Peach with its various adaptors, seats etc. I have to say one beautifully folded buggy with two seats still attached is  major draw for me. The Phil & Teds Verve is definitely near the top of my list of pushchairs I would like to try.