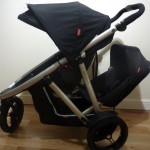 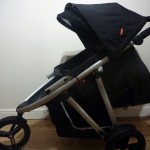 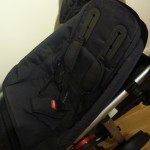 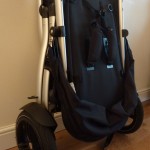 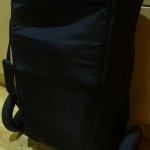 Having previously owned the Phil & Teds Vibe 1, I was very quick to purchase the new Vibe 2 after its release in order to checkout its updated features.

I’d sold the original one around a year before because although I loved it,  it had a few bits that I found quite irritating, the most obvious for me being the main seat recline mechanism – which was a fiddly strapping device, and the brake – a button positioned in the center of the handlebar that I kept pressing accidentally, bringing the pushchair to a sudden halt!

The Phil & Teds Vibe 2 landed on my doorstep and I excitedly opened the box!

The Phil & Teds Vibe 2 comes with a wipe clean, washable padded seat liner included, in either red or black, and there are a range of accessories that can be bought for it, including extra padded liners in pink, green, blue & yellow to change the look – although not all colours are available in all countries.

It has 3 quick release air filled tyres, is easy to steer one handed and can handle most terrains. The basket is a reasonable size but is difficult to access if there is a child in the doubles kit on the rear.

The height adjustable 5 point harness is great, it’s a simple twist and then slide it into position, very useful if you have children of different ages using the seats, it’s easy to adjust heights and very quickly done.

The Phil & Teds Vibe 2 can be used as a single pushchair from birth and has a very roomy seat unit. It will accommodate a child from newborn up to 6 yrs old. A hard carrycot called a Peanut can be bought and used in the main seat position when in single mode. A Maxi Cosi car seat adapter is also available to make it into a travel system.

In doubles mode the additional double kit is used, either on the front of the pushchair for a toddler while the newborn lays flat in the seat underneath (a specific Vibe cocoon is available) or in two toddler mode on the rear of the pushchair with another child in the upright main seat unit.

Disappointingly the doubles kit is quite short in height, my 19month old twins heads were already at the top of the seat unit. I understand that as the pushchair can be folded with the doubles seat unit in place that it has to be short enough to fit underneath the main seat to fold down, but I feel it would benefit from a couple of cm’s extra in height and I do think this could be added without interfering with the fold. The seat can still be used as they get taller and outgrow the current height but they wouldn’t be able to rest their head to sleep – although this wouldn’t be a problem for an older toddler who didn’t nap in the pushchair.

There is a recline facility on the Vibe doubles seat but this can only be used by a child who is shorter than the height of the rear bar of the frame as their head needs to fit under the bar when the seat is reclined. Once the child has reached the height of the doubles kit frame then they would no longer be able to be reclined as their head would be resting on the bar and it would be incredibly uncomfortable for them to do so.

The fold is very clever, it folds in half backwards, is very neat when collapsed and it can be placed in the Vibe travel bag (available separately) for easy storage.  In doubles mode the doubles kit can remain on the pushchair, either on the top position on the front or tucked in under the main seat when on the rear, it flips forward and under the seat in front. I like this feature as it means no removing/storing/reattaching the doubles kit each time I fold or unfold the pushchair.

Overall I really like the Phil & Teds Vibe 2. I think it looks good and with the addition of all the new features listed above it is a great pushchair to use. However, if the rear seat could be made a little taller then it would be a fabulous pushchair to use. I would recommend this pushchair as it’s a great choice for an inline double, it can handle the supermarkets just as well as the park, but to ensure longevity I would suggest that you try your child older child in the doubles seat first, just to check for size.