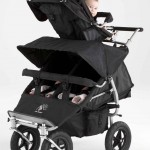 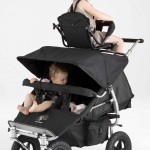 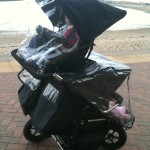 The ABC triple pushchair was a absolute lifesaver for me & my family!

I came across the ABC company on the internet whilst I was searching for triple pushchairs. I emailed the director of the ABC company, a very helpful chap in New Zealand called Phil, and he sent me all the information I could ever need, pictures, reviews, demo videos, seat options, prices – you name it, he sent it. I was immediately impressed by his detailed response and after reading all the info and having a chat with my husband I made the phonecall to New Zealand to order one. It usually takes about a month to arrive but the following day I received an email from Phil to say that there was a spare pushchair on a current shipment travelling to the UK that could be with me the following week, I accepted it without hesitation and couldn’t wait for it to arrive.

It’s very similar in style to the pre-2010 mountain buggy, it has two great sized seats and a one piece hood. The seat units recline flat for newborns and can be angled from lay flat right up to fully upright. There are 5 point safety harnesses in the seats and a removable double bumper bar fitted as standard – very cleverly it lifts up to allow access to the seats, a bit like the seats in a ride at the theme park.

There are viewing windows in the hood and in the rear of the seat fabric too, so plenty of ways to keep an eye on your children. The break is a footbrake in the form of a large bar on the rear of the pushchair with stoppers on either end which land on the wheels to stop them from moving when the brake is engaged.

The shopping basket is a great size with a full zip cover and storage pockets on the side. It also has shoulder straps attached to it so it can be un-poppered from the frame and used as a rucksack.

The toddler seat attaches via a large adaptor bar which is fitted onto the handlebar. It stretches the full width of the handle and then has two poles in the centre which the toddler seat attaches to, it sits directly in front of the person pushing the pushchair. At 5ft 4″ I struggled to see over the top of the seat but I could look to the sides to see where I was going.

There are two options for a toddler seat, one is called a static seat (basic seat with bumper bar, no recline, no hood) the other is a reclining seat (upright to full flat recline, built in hood and bumper bar). As my son was only two years old and still slept during the day I opted for the reclining toddler seat. It also meant that I could change the childrens positions in the pushchair and I could let my son ride in one of the front seats if he wanted to and have one of the twins laid flat up on top with me, although my son was quite happy being up the top, he called it his “King Seat”!

The 4 air tyres made pushing it a breeze and it handled all terrains very well, my children were comfortable and slept well whilst we walked.

The fold was simple but large. The whole thing just laid backwards onto the rear wheels to fold but it did take up alot of room, the toddler seat is removed before folding.

This pushchair and toddler seat is currently only available to purchase from New Zealand, although some do come up on eBay and other selling places every now and again when people have finished using them. They hold their value very well as they are quite hard to get hold of so if you are thinking of buying new then you will be pleased to know that if you look after it, you will get a large chunk of your money back when it comes time to sell.