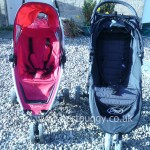 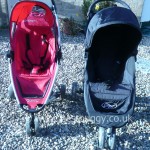 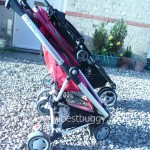 The City Mini is slightly longer and taller 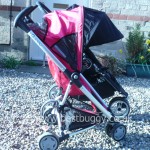 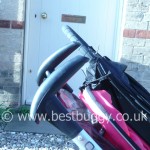 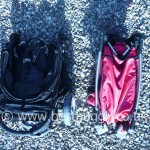 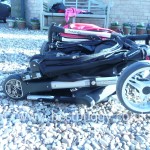 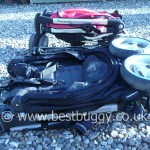 The Baby Jogger City Mini Single 2010 side by side with the Quinny Zapp.

My Quinny Zapp has been well used. It was bought because it was a small neat pushchair which fitted well in my car leaving enough space for shopping etc. The Baby Jogger City Mini is a fairly recent addition after I sold my Zapp Xtra. Again I was looking for a compact fold pushchair that took a Maxi Cosi car seat and that was easier to put up and down than the Zapp Xtra. At first glance the City Mini is the bigger pushchair. It is slightly longer and the hood and handle stand a bit taller, but there isn’t really much in the two pushchairs apart from when they are folded.

The Zapp is light, easy to carry when folded or erect. There’s no doubt that the compact folded size was a big draw for me as it will be for many. It’s easy to carry one handed by the holes in the footwell. The City Mini is a slightly heavier pushchair. The pushchair folds in half with the quicket fold you will have ever seen! Quicker even than the Leebruss Takeoff!! You simply remove the child, undo the safety straps and grab the central handle and pull. The pushchair folds into a neat package in your hand and you have the handle to use as a carrying strap. The fold is then fairly flat and the wheels just pop off if you need the pushchair to be even slimmer. The Quinny Zapp in contrast uses a 1,2,3 button two handed method. You have to push in the buttons in order. The first two are easy but No 3 is a strange forwards movement which takes a bit of getting used to and I have to say isn’t very elegant! So whilst the Zapp probably is better for a compact fold, the Baby Jogger City Mini definitely has the quickest fold.

The Quinny Zapp is very comfortable for my daughter with a good shaped seat and comfy shoulder pads. The Baby Jogger City Mini has a padded seat and shoulder straps too. The Zapp seat doesn’t recline at all, which I know puts many people off, but its never been an issue with my daughter. Even if she fell asleep, the padded shoulder straps held her head comfortably in place. The City Mini meanwhile does recline to flat using a strap system, which means the seat back can be placed in any position you wish, from upright to flat. The back of the City Mini seat has a mesh. This is handy for being able to see your baby (although there are also two peekaboo windows in the huge City Mini hood) but also offers ventilation for hot summer days. When its cooler there is a drop down panel to cover the mesh and give protection against wind or rain, or simply to provide a dark environment for sleeping. I have to say that the drop down seat was a life saver for us on a recent day trip. My daughter decided to have a tantrum in a long queue of people and I simply pushed the baby as far to the back as I could and she happily sat on the seat and all was happy again!! I am sure Baby Jogger wouldn’t advise this, but it shows how large the City Mini seat is. The City Mini has an amazing 5 strap height settings to grow with your child, and its is simple to move up a notch. The City Mini buckle means you can do one side of the harness up at once, whereas the Zapp buckle requires a jigsaw puzzle approach to get the pieces to align. I like the way the City Mini straps swivel to stop tangles. I like the clips on the Zapp harness to allow you to easily put on a cosy toes.

The Quinny Zapp has a decent sized hood with windows in the sides to look at your child and the City Mini hood is enormous…the best hood I have ever seen on a pushchair. Great for day time napping, as sun protection or protection against wind or a light rainshower.

The City Mini is much better for pushing. Although the handle height is fixed, the curved handle shape means you can grip it wherever you feel comfortable. I am not keen on the trigger like handles of the Zapp – they aren’t very forgiving in your hands and I do find my hands can hurt between my thumb and fingers from gripping them. The handles are also a bit too low for me at 5ft 6ins and I find I can’t hold onto both handles at the same time as I stoop and it hurts my back. So I have to hold one handed. I have to say the Zapp can cope with this quite well although I end up taking up more pavement room as I prefer to push the left handle with my right hand. I think its more comfy! However the City Mini isn’t as happy when I use one hand. I find it can tip around corners. When I met the Baby Jogger team recently I mentioned this and the first thing they asked was if I steer with one hand….which I do because I have to hold a toddlers hand somehow and push a pushchair out here in the real world! I must say I was delighted to see that there is a new 4 wheeled version of the City Mini due out this summer. The Quinny Zapp I have to say is surprisingly sturdy and stable (as long as you don’t try to hang bags off the handles!). But the small wheels on the Quinny can make a real clatter on some surfaces – to be honest to the point of being embarrassing. I can’t say as yet I have even noticed the City Mini wheels making a noise. Both have foot brakes. The Quinny has two brake pedals – one for on, and one for off. The City Mini just has one flip up / down pedal.

I  realised that storage space on the Zapp was an issue so bought the underneath basket and a wedge shaped shopping bag for the back which solved my problems! The City Mini has a good sized basket. My large handbag and the small changing bags we use, fit in no problem through the curved part of the frame at the back. There is also a very handy net bag on the back of the seat. Also I find that the ledge / net at the top of the seat is a great place to put a bottle of water when pushing along. Again whilst its not advised, I can easily hang a heavy handbag off the back of the City Mini with a baby in the front and it doesn’t even flinch. I wouldn’t want to even try this with the Zapp for fear of it tipping.

The raincover for the Quinny is very poor though and I replaced it with a Graco Universal raincover.  I have to say, I haven’t as yet used my City Mini raincover! The hood is enough for most quick dashes in the rain into a shop or activity group! Both pushchairs take a Maxi Cosi CabrioFix or Pebble car seat. The adaptors for both are sold separately. The 2011 City Mini will also take a carrycot which makes it a very useful travel system.

I have to say that I do own both these pushchairs and like them for different reasons – mainly the compact fold of the Zapp but the quick fold of the City Mini. But I don’t think you can argue that the quality and features on the Baby Jogger City Mini are far superior to the Zapp and if you said I could only keep one of these two, it would be the City Mini by miles. To be honest, especially once the four wheeled version comes out, it would be very hard to beat the Baby Jogger City Mini as a light stroller type pushchair that is a travel system from birth to five. It truly is a pushchair that would do everything you want and more. A little gem and highly recommended.