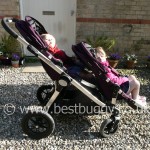 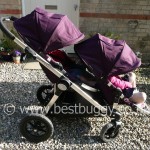 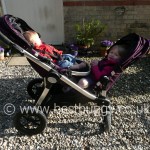 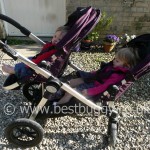 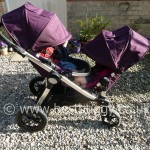 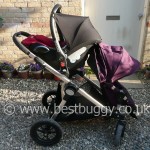 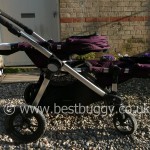 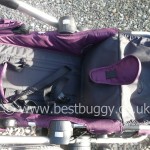 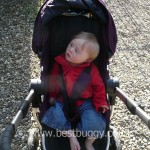 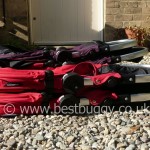 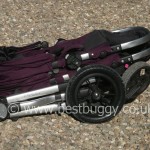 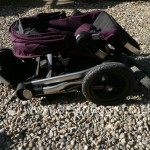 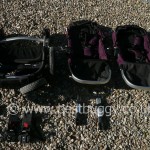 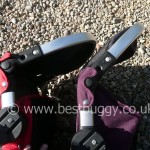 These are some photos showing the new 2011 Baby Jogger City Select in Amethyst. These are just a few photographs of what the City Select is capable of to use in conjunction with the other photos on Best Buggy.

The chassis has not changed. The differences between the 2010 and 2011 models are in the seat unit. The side by side comparison photo shows the main differences. The stitching runs vertically on the 2011 model. There is additional padding in the seat unit plus a hard PE board in the seat base to give the child more support. This means that the seat units no longer lie flat when stacked, but to be honest it doesn’t make that much difference. The footrest fabric is ’solid’ in the centre on the 2011 model with the Baby Jogger Logo, instead of the more mesh like fabric of the 2010 City Select.  The shoulder pads are embroidered with the Baby Jogger Logo in the same colour as the fabric which makes it a bit more subtle! The two units are shaped slightly differently at the top but the seat length is exactly the same. But the measurements are ever so slightly different.

There is 1.5cms more thigh support from the crotch strap to the knee seam on the 2011 model.

(Note: these measurements were taken with the seats flat on the ground)

The PE board in the seat can be removed but there is no way to add a PE board to the 2010 model as there is no velcro opening.

Finally the footrests have now got a “stop” on them, to stop them being pushed underneath the pushchair. This makes folding the Baby Jogger City Select harder & less neat with both seats on, as the footrests do not tuck as far under as they used to do.

Many Thanks to Kooltrade for the loan of the Amethyst Seats.