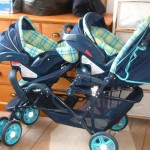 I had a Graco Stadium Duo for my 1st set of twins.  There wasnt much on the market back then for twins, and the Jane Powertwin had just been released and it was way too expensive for me at the time.

We were sure we wanted a twin travel system but had only seen them in the USA.

I decided to go for the Graco Stadium Duo for 1 main reason.  We had tried it out in mothercare and knew it took 1 car seat on the back seat, and we were curious as to whether we were able to fit a 2nd car seat to the front seat securely.  We tried it out and sure enough it fitted on to the front seat and clicked securely onto the front play tray.  We were happy to transport our twins in this way and so it was promptly bought.  It isnt recommended by Graco to use it this way but it worked well for us.

It was fantastic to have a light easy to push tandem which took both car seat and a buggy board for our then 16m old.

It was easy to fold and came with a canopy on the front and the rear seat.  I could see both babies easily and i could get in and out of shops with ease.

Once the twins got to 6 months old and we starting to sit, we began using it without the carseats.  There isnt a lot of padding to the seats themselves but they are roomy and adequate both with a 5 point harness.  There was an issue with the back seat however.  It didnt have a sure crease where a bottom would sit- it was kind of sloped and i found i was always having to hitch one of the twins up out of the shopping basket!

This wouldnt be an issue with a newborn in a soft cot or a car seat but once you have an older baby/toddler in there it might become uncomfortable.

We ended up swapping it when the twins turned 10 months to a side by side maclaren pushchair which suited us better at the time.

In summary this is a good value tandem system suitable for a baby and a toddler or 2 toddlers but check out the sloping of the rear seat to see if it would cause any issues.