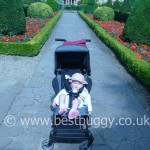 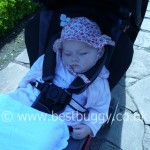 The padded shoulder straps were supportive, and the seat reclines. 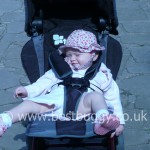 I bought this amazing pushchair when my eldest was around seven months old. I bought the Takeoff because of the neat package it becomes when folded. I must say I got in a pickle at first trying to fold the Takeoff correctly, and did have to phone the shop for help, but before long the knack was second nature and I could fold and unfold the buggy in seconds with baby tucked under one arm (always a positive!) There was a great net bag on the back and as you can see in the photos, I managed to loop a small changing bag through the handles and then it rested on the open hood. The Leebruss Takeoff was incredibly comfy with lovely padded straps and a slight recline. Even asleep my daughter looked comfortable. The small wheels did give us issues when the ball bearings went but it got fixed very quickly under warranty. We used to get people watching us amazed in car parks as we quickly flicked open and shut the pushchair in seconds. There was a neat ‘tow’ handle so you could pull the Take off behind you folded, and we purchased a travel bag. All round I have to say I loved my Takeoff.

The biggest downside for me, and what caused it’s sale, was that, as the photo shows, my daughter used to splay her legs over the sides like an aeroplane. No problem when visiting a park but in a supermarket she sent a few displays flying and also, the final straw was when she got her feet caught in a display! At the time I thought she would have been better at keeping her feet on the foot ledge as she got older, but to be honest even now at two and a half she still prefers to dangle her feet rather than use a footrest. But other pushchairs because of the side supports (lacking on the Takeoff) force her legs down rather than out so she isn’t such a liability. Otherwise the lack of a side was not issue. The bumper bar was pretty redundant. We did try to take the Leebruss Take Off onto a small land train but because the fold is square it just wouldn’t fit by our feet like an umbrella fold or flat fold pushchair would have done, but the square fold suited our car better and the Takoff fitted really neatly to one side leaving plenty of space for shopping.
All round though the Leebruss Takeoff is a fantastic pushchair. I would recommend it.