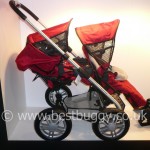 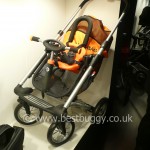 The Mutsy Urban Rider is a great looking tandem pushchair. I really like it. I have always been told it is heavy but 16.5kgs its slightly heavier than a Jane Twin Two (15kgs), but lighter than a Baby Jogger City Mini. I have to say I think its a really funky option for carrying two children around!

However the Mutsy Urban Rider isn’t designed to be a tandem. It is a single with an add on extra option for owners to extend the life of their Urban Rider when Baby Number two comes along. The front seat is only suitable for children over 6 months old, I believe because the front seat won’t recline with the back seat in place. The rear seat however is suitable from birth although Mutsy suggest you use their inlay in the seat to make the seat smaller for an infant.

There are two hoods on the Urban Rider Duo and a good sized basket which appears to still be very accessible even with two seats on the chassis.

We weren’t able to test drive the pushchair so I can’t really comment much more but I believe the front wheels operate independently to steer it easily. I have to say it is one pushchair I would love to try out because it looks great!

One new addition for the 4Rider is the Mutsy ’Fun Seat’ which is pictured above. This is a fun seat for your toddler to sit in and has a huge basket at the back for toys, picnics etc., and you can buy the orange bag to go inside of it, making day trips to the beach easy! I bet most children would love one of those! What a fun way to travel!