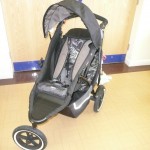 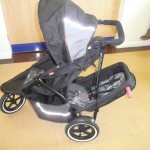 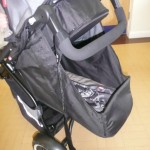 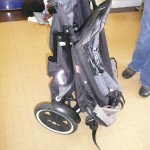 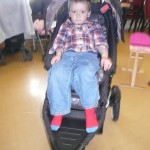 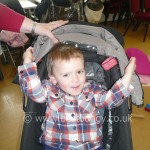 Note the bar behind the child's head means he can't sit back comfortably. The child is 2.5 years old.

First of all, let me give you a bit of background into WHY I bought a Phil and Teds!  All my friends (those who have 2) have been raving on about how good Phil and Teds are!  I have had many Buggy difficulties and never really found the best one!  so i did a lot of research into this one, determined that his would be the last one!  it would be the best!  I went to Paul Stride in York and they were excellent there!  they let you try out all the buggies in your car, put them all sise by side and even put weights or your children in and push them round to see how it feels.  I looked at all the range (back in October before explorer came out) and decided on the DASH, it had a few more features than the SPORT break on the handle, reclining and padded doubles kit, both points raised as a problem by my neighbour with a SPORT and it fitted in my Citroen C3 so it made sense!  The package was great!  439 with double kit, cocoon and double raincover!  How could I resist?

I used it while I was pregnant with Mary, my second child and the reason for buying it.  I loved it compared to my M&P pliko switch (dont get me on to that one!!!)  you can push it with one hand, it was so light, it fit in my car it was great!  but then I had Mary.  Not a small baby at 9lbs!  i needed it as the double so I excitedly put the double kit on the top and lowered the main seat into the horizontal position and then I realised…. it is terrible as a double!!!  It took 10 minutes to ‘load’ the kids into it, if you didnt have the brake on it would roll away in the car park, the break is put on by lowering the handle but then you cant get the child under in the cocoon…. it goes on… then the 2 year old on top is cramped as his head is touching the hood and screaming because he is uncomfortable!  I have been out in it in the rain once…. you get this lovely bag it comes in but once you take it out you will never get it back in… it took 10 mins in pouring rain to get it out and needed to be a member of mensa to work out how to fit it!  then once it was on it was so tight against the face of George on the top that I was scared he would suffocate!  so we went home in disgust and i vowed never to use it again!

I thought the usage of it at Centre parcs might be better and to be honest, it was, you dont need to fold it (which, by the way if you do you have to put the handle bar on the ground to get it in and out of the car) and surely it would be good.. again we used it with the main seat down and double on top, the restricted view for the 3 month was horrible and george hated it on top so half way through the week we swapped it round, the 3 month in the double seat below (which is not supposed to be used until 6 months) and toddler on top.  This, to be fair, was better but not good for her back.  One of the reasons for getting a P&T was the flat cocoon!  you cant attempt to go up cerbs or go over bouncy ground as they get hit on the back of the head, you have to stretch over them to push as your calves hit the double kit, the one underneath has a restricted view and gets very bored, even at 3 months!  It is still easy to push with one hand and that is the only nice thing I could say about it!  To cut a long story short, i have just listed it on e bay!  i have maybe used it as a double 5 times!

oh, also the very expensive change bag that goes with it does not fit onto it anywhere, actually no change bag does!  you end up sticking it on top of the handle bars although you can get side bags but that makes you wide and if i wanted to be wide i would have got a side by side!  there is nowhere to put shoping again another thing you would want to do with a buggie!

the DASH is pointless and i would not recommend it to anyone as a double but as a single its great (appart from the fact that when you recline the seat it is totally open and they can see right through!!!