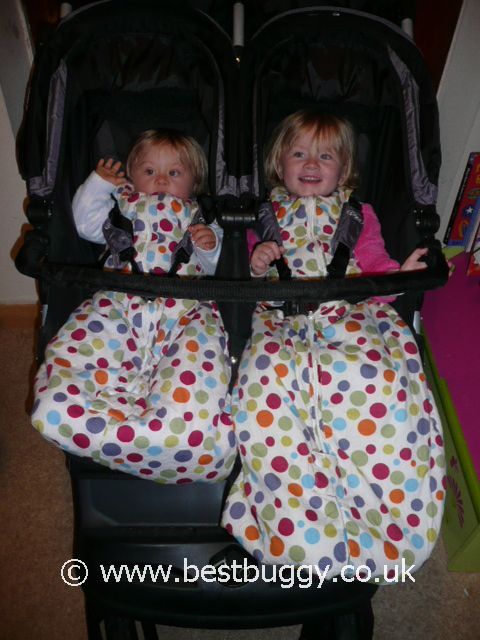 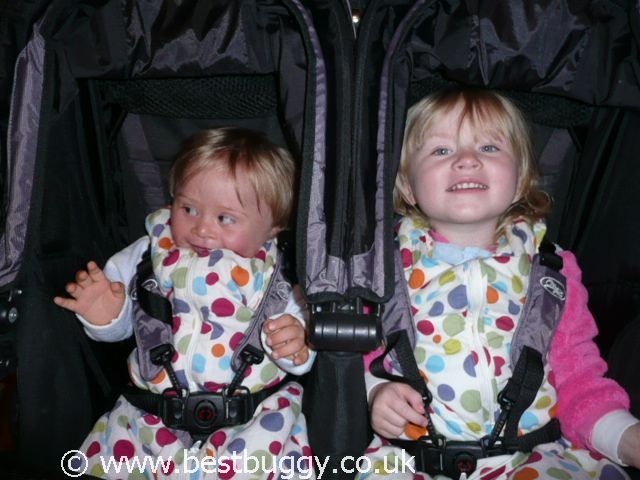 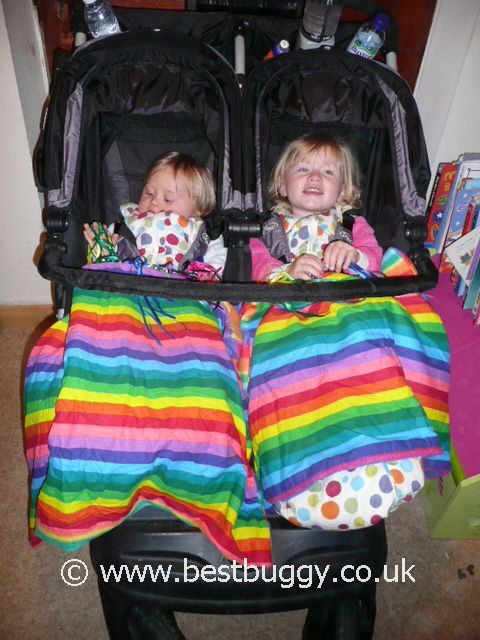 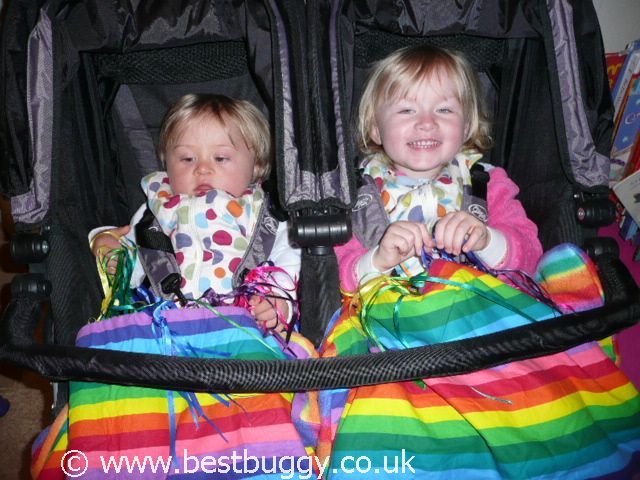 The Baby Jogger City Elite Double has all the hallmarks of the Baby Joggers – the huge hoods, the excellent storage and the easy fold – but the Elite also has lots and lots more fantastic features which really makes the Elite deserving of its top of the range name.

First of all you notice the Elite Double has large ‘forever air’ tyres. These help to give the Elite a bouncy feel as you push it along. The Elite has gone over everything I have thrown at it easily – through pot holes, down small steps, over rough ground, up and down hills and of course it coped admirably with every day pavements, kerbs, gravel, grass and more. Handling wise it is very good.

I have found the front wheels occasionally stick if I stop and try to go again or if I am sharp cornering in a shop, but to be honest this is one of only a couple of minor niggles I have found with the Elite, and this may well be because the wheels need some TLC.

The Baby Jogger City Elite Double also has a chunky footplate which makes it look sturdy. I have heard of several stories of older children hitching a ride home from school sat on the footplate (not recommended by Baby Jogger of course!) The swivel wheel lock is situated in the centre of the footplate. Above the footplate are the calf rests, or kicker boards, which can be raised up to give a flat foot / leg support for a sleeping child making it much more comfortable for them. These are a small detail but they can make a huge difference.

The next obvious feature is the parent console which stretches the full way across the double handlebar with pockets galore. There are 6 pockets on each side, so 12 in total, to store everything from drinks to keys, phones, purses, cameras, snacks and more. I love that six have flaps on to hide valuables, but six don’t so that you can stand bottles or cups in. The storage doesn’t end there! There is a large net bag on the back of each seat plus there is a massive underseat basket. Unlike the City Mini there is good access through the rear because the bar that runs across the back leaves wider spaces for access. There is also access through the sides, or even through the raised kicker board! I love the storage on this pushchair and I wish that every pushchair had a good parent console and net pockets like the City Elite!

The Baby Jogger City Elite Double has an adjustable handlebar. It has a huge range from very low up to very high, so there should be a height to suit everyone. This was great news for me because sadly the City Mini was at just the wrong height for me and put strain on my back. But I can comfortably push the Elite for hours, up and down hills and across bumpy fields with no back pain at all. It is almost effortless to push and you feel like the Elite could cope with anything that you throw at it!

The Elite like the City Select, has a handbrake. I love the Baby Jogger handbrakes. They are so easy to use. My only minor niggle is that if you park the pushchair on the wrong side to the brake then you have to walk round to apply it or remove it. But its a minor point!

As for the seat units – they are some of the most comfortable, most padded seats I have ever seen. They are so luxurious! The harnesses have big chunky buckles, and the harnesses have pads on them. As with the other Baby Jogger pushchairs, there is a choice of 5 height settings to suit every child. The seats are enormous. My 2.9 year old looks lost in them! As you can see from a previous set of photos, the Elite seats comfortably took much older children. This is one pushchair that will very comfortably take you from birth to five or even beyond!! There is no worry about the hood height either. The hoods are high and massive. I love the way they come round down over the child if necessary, but also unlike a lot of hoods, they look good if you just have one or two folds open as well as three.

We went to a firework display this weekend and we purposely chose the Elite because we suspected one or both the children would fall asleep, plus we wanted something with large tyres that would cope with all terrain, and had large hoods so that should it start to rain would keep the children dry even without a raincover, but also would keep the wind out and provide a comfy sleeping place. The Double Elite was perfect!

The huge hoods have peekaboo windows, but quite brilliantly they have silent magnetic catches which are so much better than the noisy velcro of the City Mini Double. There are also ventilation flaps in the hoods at either side of the pushchair. There is a separately available double raincover for the Elite. We don’t have one, but on the occasions where we have gone out and it has started to rain, the enormous hoods have kept the worst off the children and their blankets or cosy toes have coped with keeping their feet dry. Equally the hoods have kept the summer sun off the children too. I like that the hoods go right back flush with the chassis, so that they don’t compromise the view of the children at the sides.

The Baby Jogger City Elite Double also comes with a double adjustable belly / bumper bar included. The only negative to this is that because the bar goes across both children, it means my toddler can’t climb in and out on her own. We had to stop her trying to clamber over the top! But the bumper bar is easily removed. We have a console on the Elite bumper bar which is great for the child to put toys, snacks and a drink. This however is an extra.

The Baby Jogger City Elite Double is suitable from birth as the seats lie completely flat. The recline is a simple one handed tug of a strap at the back.  It does however really require two hands to push the seat up whilst pulling the strap back to upright.

The back of the reclined seats can be left open for ventilation on cool days, or has a storm flap for colder days and to keep the space dark. With the hoods down and the flaps shut, the sleeping area is pretty dark even on a bright day. My baby goes to sleep almost instantly in the Elite seats.

My daughter however wasn’t convinced by the slightly reclined seats of the Elite. To be fair most double pushchairs do not have upright seats – but she did like the ‘sit upright’ strap being applied on the Baby Jogger City Mini Double. It did make a huge difference to her level of comfort and I hope that Baby Jogger add this simple strap to the Elite too.

The Elite Double seats are just slightly larger and taller all round than the Baby Jogger City Mini.

Best of all the Baby Jogger City Elite benefits from the amazing Baby Jogger Easy Fold. The Elite requires two hands to grab the straps at the back of each seat, and then a simple tug upwards folds the pushchair. There is a storage strap hidden under the seats. Fold wise, the Baby Jogger City Elite is large, but we have found removing the side wheels (and even the front wheels) makes a lot of difference and it is very quick and easy to pop them off and then back on. It is really the wheels that makes the most difference to the size of the Elite v’s the Mini so with those removed the chassis really aren’t much different. The width is the same as the City Mini Double, and to be honest I dont find the extra cms really make much difference when storing the two. However there is no disputing that the City Mini Double with its wheels off is incredibly slim. Opening the pushchair is simply undo the storage strap, flick open and you are ready to go!

All round the Baby Jogger City Elite Double is a fantastic pushchair. It is certainly one of my favourite double pushchairs simply because it is packed full of features and works in all situations. I have to say, whilst the Baby Jogger City Mini Double seems to be the pushchair most people go for, I think once you have tried the Elite, you would be converted. I certainly wish we had bought the City Elite instead of our City Mini. It really is worth the extra money and at some point I would love a single version!

With many thanks to Kooltrade for the kind long term loan of the Baby Jogger City Elite.