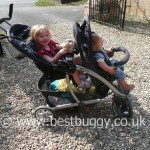 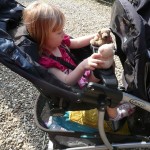 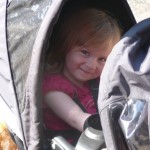 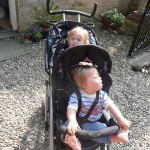 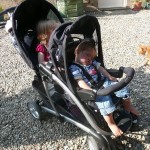 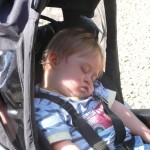 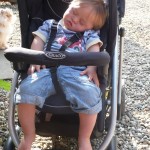 Over the years I have pushed many Graco pushchairs, including various tandems and what I have always liked about them is the feeling of solidity and sturdiness. I don’t think they come any more solid & sturdy than the Quattro Tour Duo!

The first thing that really strikes you is the size of the Quattro Tour Duo. It is very large when folded and even larger unfolded. It is one of the longest, tallest and heaviest tandems I have tested.

But all round the first impressions of the Graco Quattro Tour Duo were good. The familiar solid feel, two choices of where to put your hands on the rather odd ‘horned’ handlebar, good fabrics & large seats, and best of all for me, the enormous basket!

The Graco Quattro Tour Duo can take two car seats, or a newborn baby laid flat in the back and a toddler in the front, or two toddlers. The larger rear seat reclines to completely flat. The smaller front seat has a smaller recline. This left me with a dilemma….which child to put where. I thought my 12 month old would be better off in the rear seat so that I could recline him when he inevitably fell asleep on our outing. However when I sat my 2.9 year old in the front seat I noticed that she didn’t always rest her feet on the footrest, but instead dangled them near the wheels. I wasn’t convinced therefore that the front seat was the right place for her, especially given the back seat has a larger seat back and a lower foot rest. However the front seat only has a slight recline and a very shallow hood.

Sadly my baby lost his comfy sleeping place to potential safety issues, and he went in the front seat. My daughter was absolutely delighted to be in the rear seat with its snack tray although she took a lot of convincing that we weren’t having tea outside ie using the snack tray and that it would make a good place for her teddies to sit instead!

The front harness is smaller than the rear harness, and we struggled to get the front harness to fit our daughter well. Both harnesses are easy to adjust but we don’t like the way all of the 5 points of the harness have to be individually fitted together. It isn’t easy to plug in 2 harness straps with a wriggling child, never mind 4, and its even worse in winter with padded coats etc to get in the way!

The front hood – if you can call it that – really is not very useful. A large chunk of the rear of it is clear plastic and so my baby had the sun on him for much of our journey. Every time I pulled the hood ‘open’ it came off the rear of the front seat which got tiresome as each time I had to ensure the seat ‘wings’ were tucked in as well as pulling the hood back. I simply could not get the hood to look taught and give maximum coverage. It is disappointing that the front hood is so small and badly thought through, considering that the rear hood is so enormous.

The seats looked and felt comfortable for the children. They did look a little narrow at the back though. Strangely the front seat is deeper but yet narrower, which added to my confusion re what child went where.  My sons head was already several inches above the top of the front seat at 12 months old. I loved that the rear seat has a liner which unzips for easy washing. Great for possetting babies or muddy / sticky toddlers!

I have to say my daughter loved being in the rear seat. I think she loved the height, the good view out of the sides, large seat and foot rest that was the correct height for her – no dangling legs at the back! The footrests are fixed. Part way round this trip she actually told me she liked this pushchair which is a great thumbs up from her. As suspected my son fell asleep fairly quickly. He didn’t look comfy with his head flopped to one side, and he didn’t sleep for as long as usual either.

I loved the storage on the Graco Quattro Tour Duo. There is a huge accessible basket – easily accessible from the sides and rear. Not only that, but the basket also collapses down to floor level to facilitate easy access, especially when the rear seat is flat. I love it! The only niggle is that the basket is only tested to 5kgs which really is not much given a) mums have to shop and b) the basket is enormous. It would have been great if Graco had found a way to make the basket hold more weight. There is also a tiny basket at the front under the front seat and a net storage pocket on the back of the front seat. There are two cupholders on the rear seat snack tray and two cupholders either side of the handlebar for the parent – very useful!

I had Graco one car seat and it fitted reasonably well into position in the rear seat. It sits into the snack tray, so there are no adaptors needed which was great! I did find it a little tricky though to get the correct angle and I was thankful I was not attempting it with a heavy baby in the seat! I am sure it becomes easier to do across time. I found it was easier to put the car seat on in the rear whilst the front seat was empty and then I could pull the front seat hood forwards to give better access. The car seat will also fit onto the front seat position, on top of the bumper bar, and so you are able to have two car seats making this a possible twin option. My only concern with this as a twin option is whether one baby will sit / sleep comfortably in the front seat before a year of age? I can’t say I felt happy with my baby being in the front seat today.

The Graco Quattro Tour Duo front seat has a weight limit of 22.7kgs (or 114.3cms) which is huge for a tandem, and the rear seat has a limit of 18.1kgs (or 109cms) with a combined weight maximum of 40.8kgs across the whole pushchair. That is probably the largest weight limits I have seen on a tandem. But I can easily believe it because the Quattro Tour Duo is solid. However this is where I come to my biggest problem! This pushchair may be sturdy and solid, but it is extremely heavy to push!! I think it is probably the heaviest tandem I have had to push to date. However I will say that it was very possible to push one handed, largely because the Quattro Tour Duo is so solid that it doesn’t veere to one side as you walk along. It stays perfectly in a straight line. But yes…it was heavy!! By the time I was halfway round our usual route, I felt like I had done a work out. My wrists most noticeably were really hurting, as was the inside of my arms. It wasn’t quite as bad as the Joovy Ergo to push, but not far off. I know all tandems are heavy but I purposely take a different pushchair out each time, on the same route to be able to make these comparisons, and believe me, let me stress the Quattro Tour Duo IS heavy!!

The Graco Quattro Tour Duo is also long. I didn’t even attempt my usual “small space” tests today…I knew that we would get stuck. I had a few hairy moments when I wondered if the pushchair would get through various small spaces, but it made it…just! For a large pushchair the manoeuverability and handling was very good. I was impressed to be honest. At no point did I have to drag the pushchair to corner. The front wheels do lock or swivel.

The Graco Quattro Tour Duo handled my other tests with mixed results. It drove up a step relatively easily, and came straight off it again without flinching. However I found kerbs a little more tricky to get up – maybe because I didn’t have time to stop and press down hard on the handlebar lest I got squished by a car! It performed great across grass, gravel, rough ground and cobbles. It wasn’t noisy at all.

The raincover fits really well onto the Quattro Tour Duo and is easy to fling over and worry about the velcro fastenings once the children are dry.

The Graco Quattro Tour Duo folds really easily with one hand. Simply push the button, rotate the barrel and lean forwards and the pushchair locks into place. It freestands when folded, but it is large and bulky when folded.

But equally the Graco Quattro Tour Duo offers great value for money – you get a lot of good quality pushchair for your money with comfy seats, the raincover, aprons, great storage etc all included and no need for car seat adaptors. I think my main negative is the weight when pushing and carrying the pushchair, but if you have a strong OH or want to get rid of your ‘bingo wings’ then that shouldn’t be an issue!