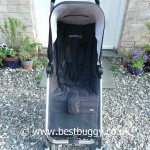 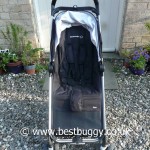 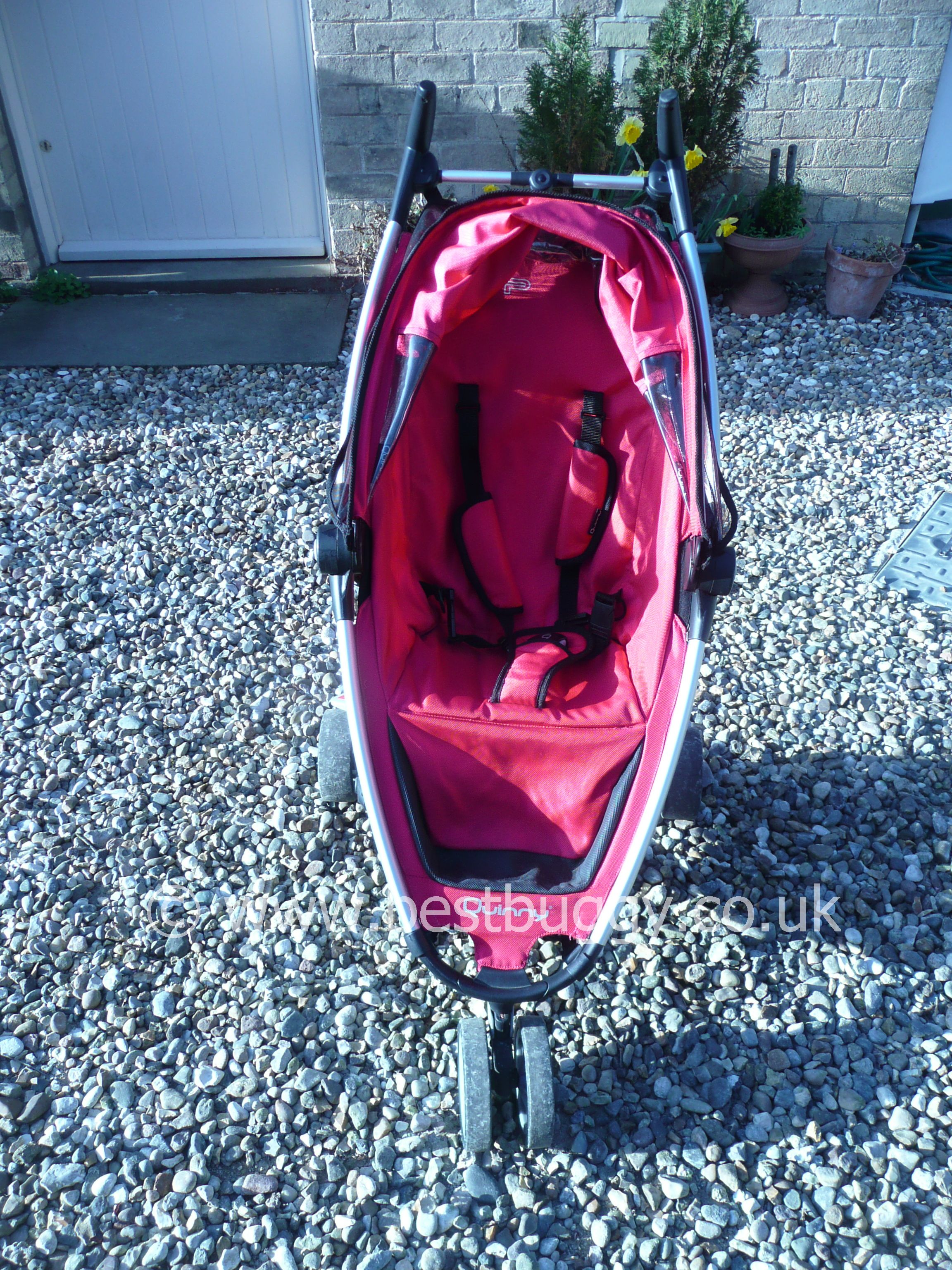 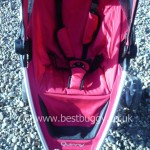 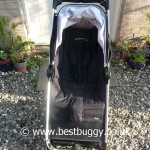 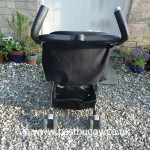 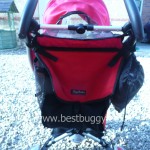 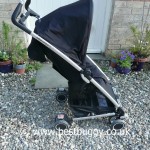 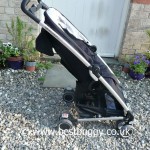 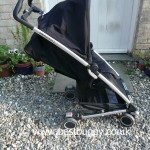 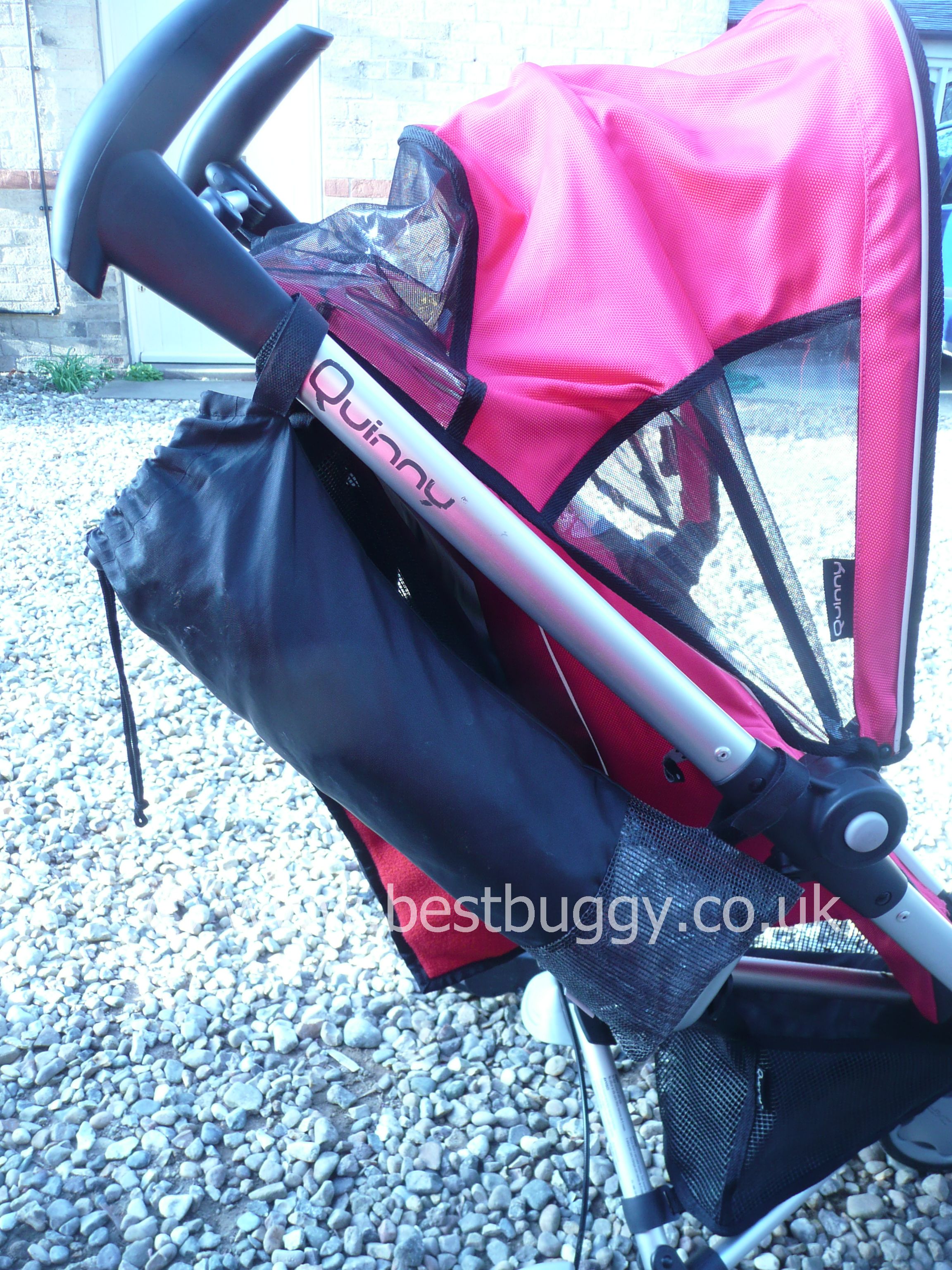 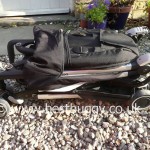 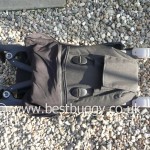 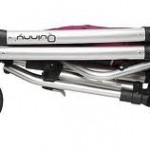 The Maxi Cosi Noa is a new pushchair to rival the Quinny Zapp.

This is a quick comparison of the two.

Open: 81cm x 59cm x 102cm
Folded: 70cm x 25cm x 29cm
Weight: 7.8kg
Feel: The Quinny Zapp feels more sturdy and solid in the chassis. The Maxi Cosi Noa is a > shape and as a result there is a lot of flex in the pushchair. However this for me translates as good suspension rather than it feeling rickety or wobbly. The Noa is still sturdy and the bounce in the frame is great for getting babies to sleep! I worried about putting my almost 15kg toddler into the Noa lest it should break…but amazingly the Noa coped fantastically well with her weight plus shopping! At one poing Mr BB forgot to remove a heavy shopping basket from the Noa handlebar before our toddler climbed out..and to our surprise the Noa didn’t instantly fall backwards like most buggies would have done. It stayed completely upright!
Open / Fold: The Zapp is hard to open up – especially when new, and its cold and its winter and the chassis feels freezing!! Chassis tend to loosen up across time, but my new Zapp was absolutely awful to open even after lubricating the mechanism. It made my arms hurt so much that I had to sell it in the end. Fold wise, the Zapp is just as bad, if not worse. Trying to do the No 3 part of the fold is hard!! The Noa conversely has what sounds a complex opening, but in fact its incredibly simple! Press a button on the top of the handlebar to unfold and then press the bar down to fix into place. To fold, press the button in on the bar to release it, then press the button in on the top of the handlebar, and fold down and the Noa clicks closed. The Noa is a one handed fold, the Zapp takes two hands and a good shove!!
Seat Units: Both pushchairs have good sized seats for a toddler. Both are simple fabric seats with no padding in them. Both have good shoulder pads. But the advantage for the Noa is that is has a reclining seat. Undoing zips on both sides of the rear of the seat allows fabric to drop down forming a comfy place for a child to sleep. Both pushchairs have footrests low down suitable for a toddler.
Hoods: The hoods are similar. Neither is particularly deep and both are fairly flexible ie thin fabric on a frame. But there is enough to offer some shade or protection from the wind. The Noa hood extends when in recline mode.
Handle bars & Pushability: The handles are a little higher on the Noa and for the taller parent. this makes the Noa more comfortable. The Quinny has strange shaped handlebars which can feel hard on your hands. The Noa handlebars are hard plastic like the Quinny ones, but they feel more comfortable in the hand. Both pushchairs can be pushed with one hand, but the Zapp does have a tendancy to veere off in any direction! There is much more control with the Noa when pushing one handed. We zipped in and out of shoppers no problem.

Basket: The Zapp doesn’t come with a basket as standard although it is possible to buy one. The Zapp basket is a two part basket either side of the central chassis strut. The Noa basket has the chassis X running through the middle of it. There is a larger space at the front ie nearest the parent, with the possibility of packing more around the sides and back of the basket. I would suggest that both baskets hold a similar amount of items. I could get a Pacapod changing bag into the Noa with spare room, and but two in the Zapp basket – one on either side – with no room spare.

Wheels: The Quinny Zapp has three hard wheels which are extremely noisy on certain surfaces. They are wide and chunky wheels. The Maxi Cosi Noa has 4 smaller more buggy like wheels which appear to date to be quiet when walking. The Noa is definitely more nippy than the Zapp.

Other features: The Quinny Zapp has options to take a Maxi Cosi car seat, or also to upgrade to take a Zapp Xtra reclining hard chassis seat unit. We have found the Zapp exceedingly useful as a chassis on which to place the car seat when our baby was little. However, the chassis as stated became too hard to do, and we swapped it for a Baby Jogger City Mini which was much easier to use.

The Noa has a telescopic pull out handle. We had a Takeoff and that had one too but we never used it. However we have already used the Noa handle to pull the pushchair along behind us when our toddler wanted to walk, but we knew we would need the pushchair later on (at a party). The Noa sat quietly in a corner until our toddler’s bedtime and then she lay down quite happily in it. I can see the handle being useful for a mum doing the nursery run who doesn’t want to walk home with an empty pushchair – although I suspect she would get some querying looks pulling a rectangular box behind her instead!

Both are suitable from six months old.

In Summary: All round for me the Noa is definitely a better pushchair for handling, fold and the reclining seat. The one handed Noa fold is very useful when trying to hang onto a disappearing toddler. The only reason I would choose the Quinny Zapp over the Noa would be to be able to use a car seat on the chassis…but even then I would suggest using it for that purpose and then swapping to a Noa later!

Note: Please use this quick summary in conjunction with the more detailed individual reviews.