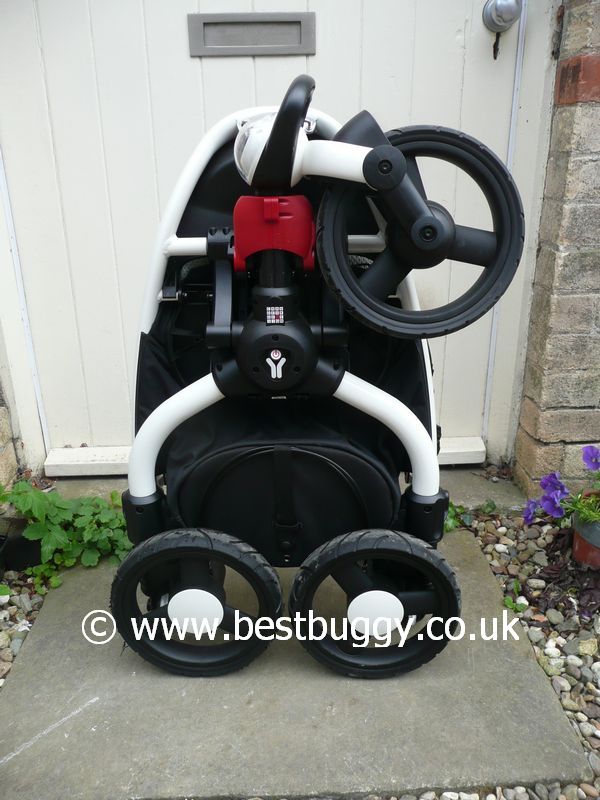 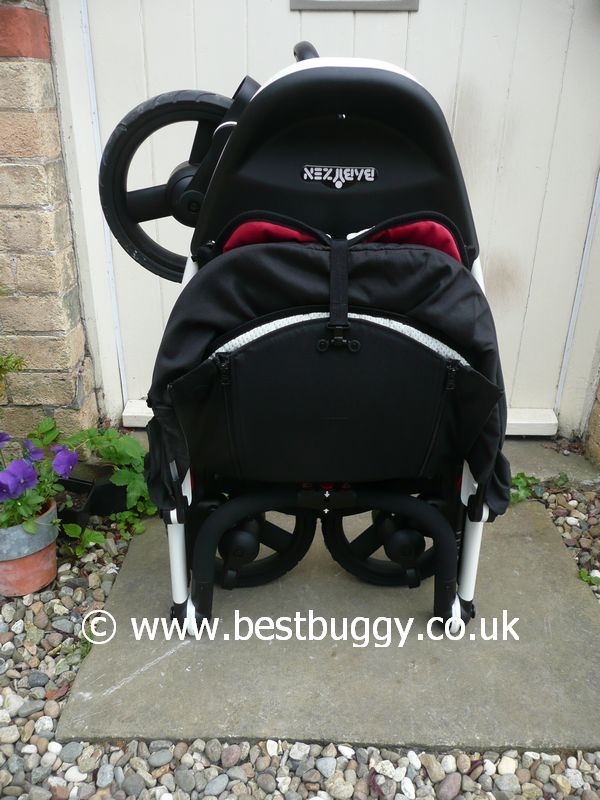 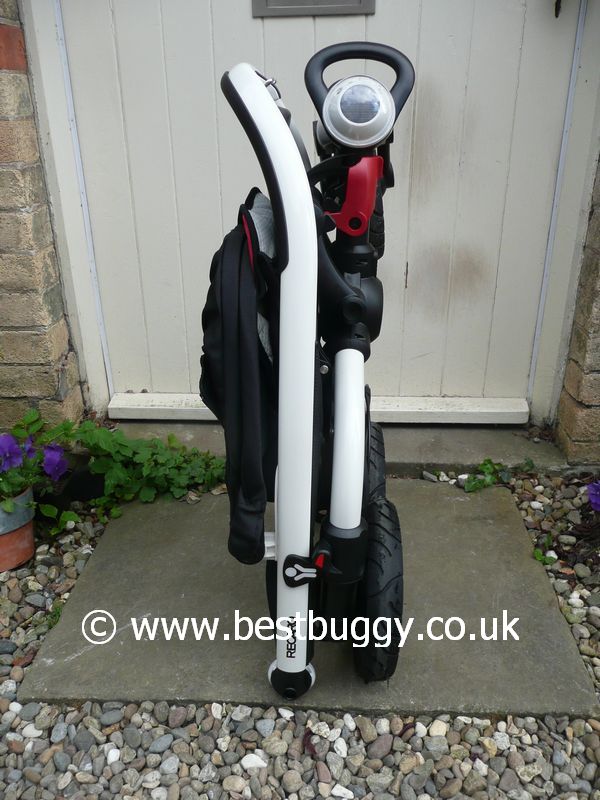 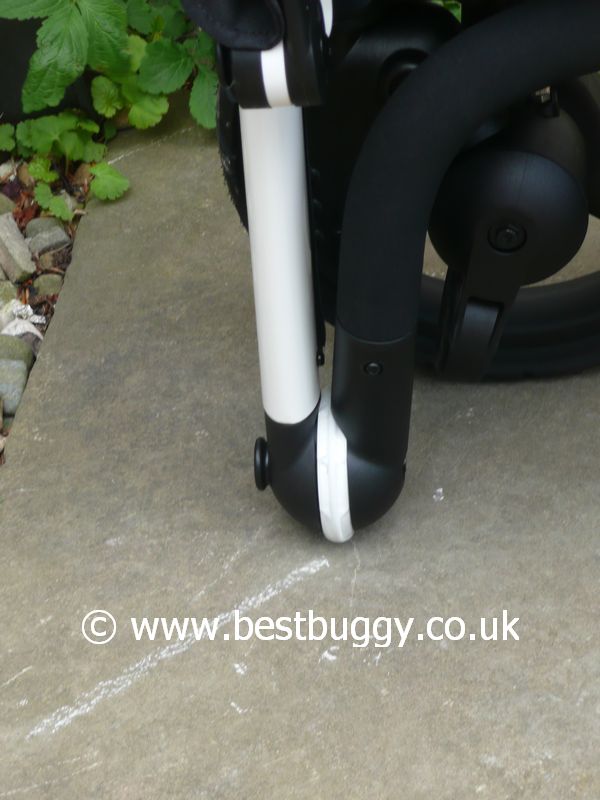 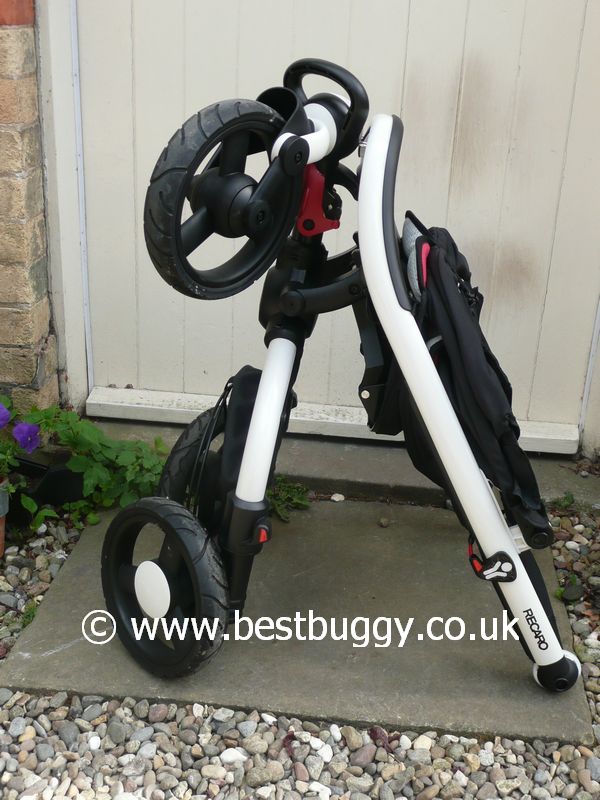 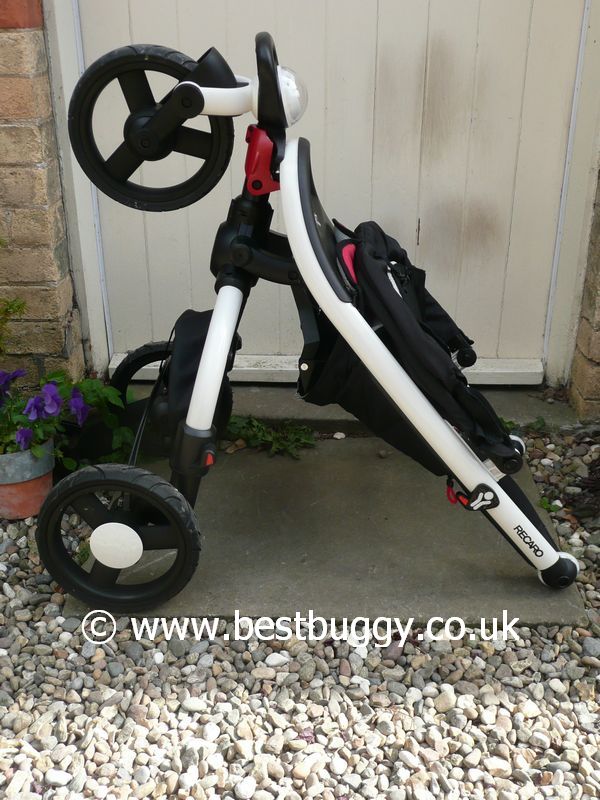 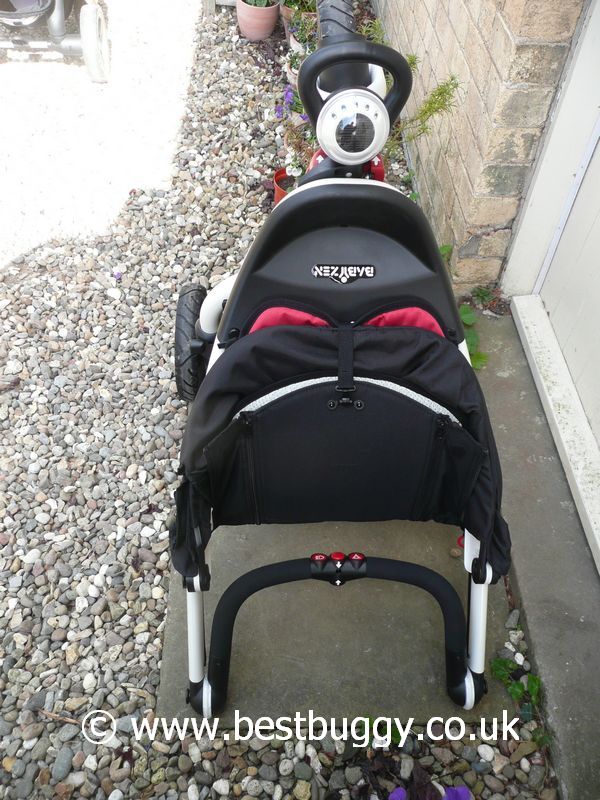 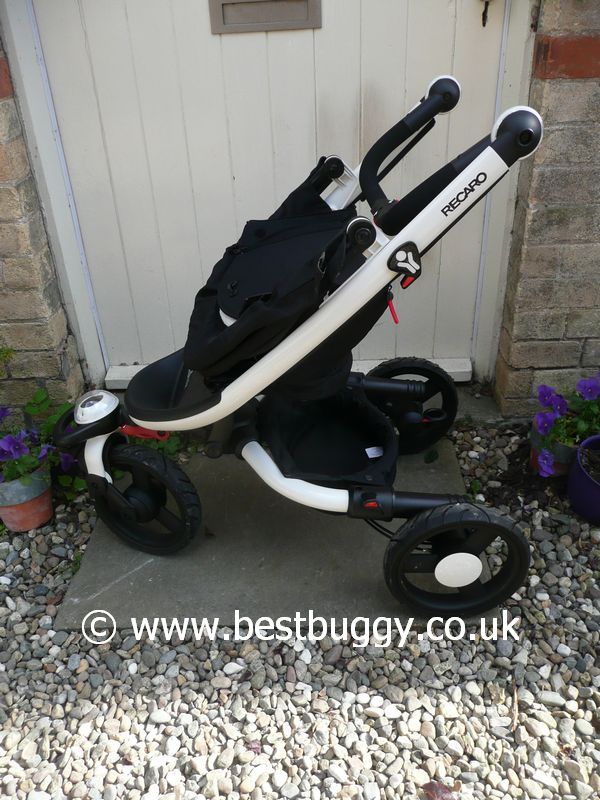 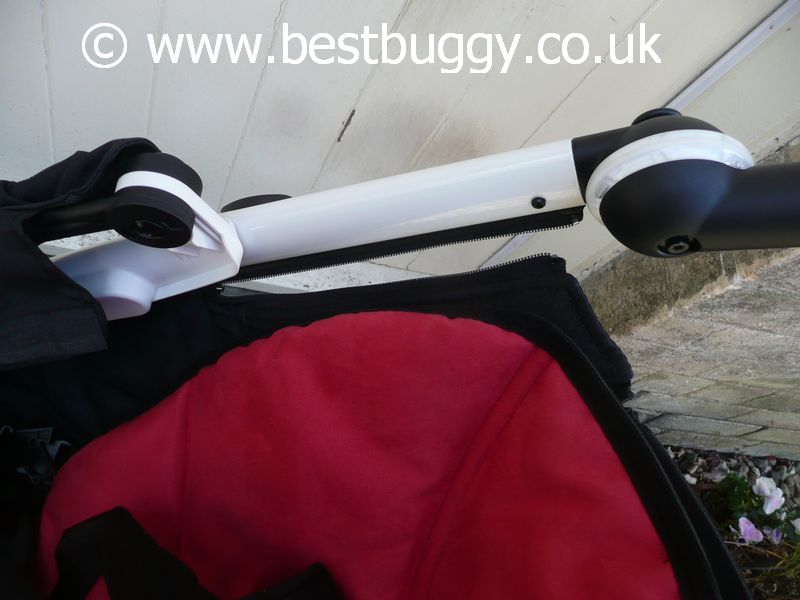 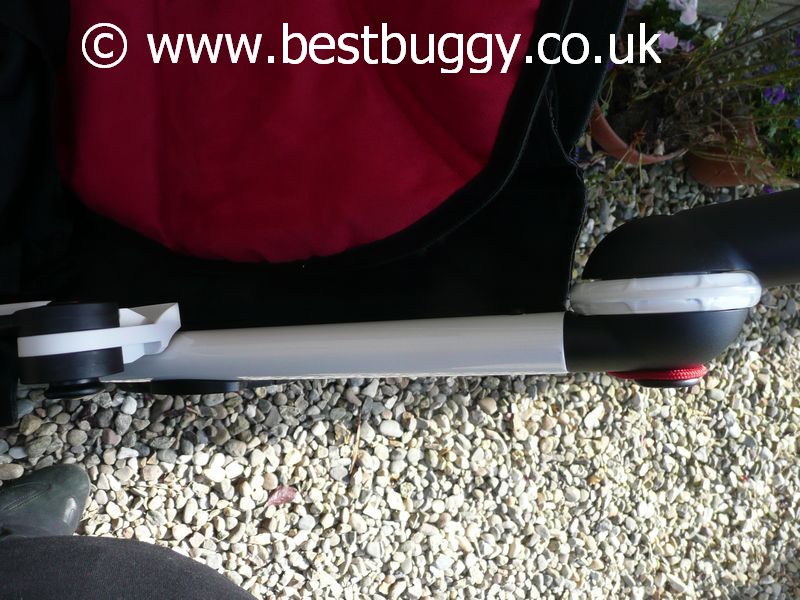 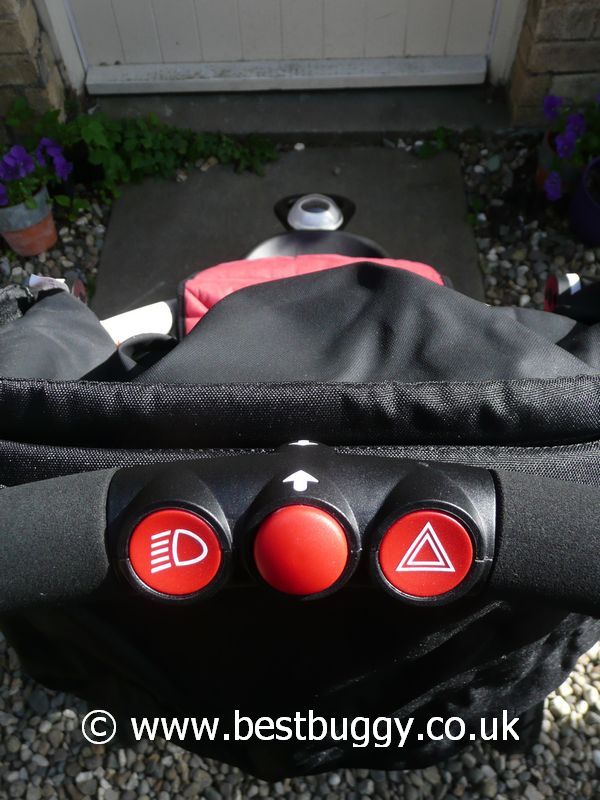 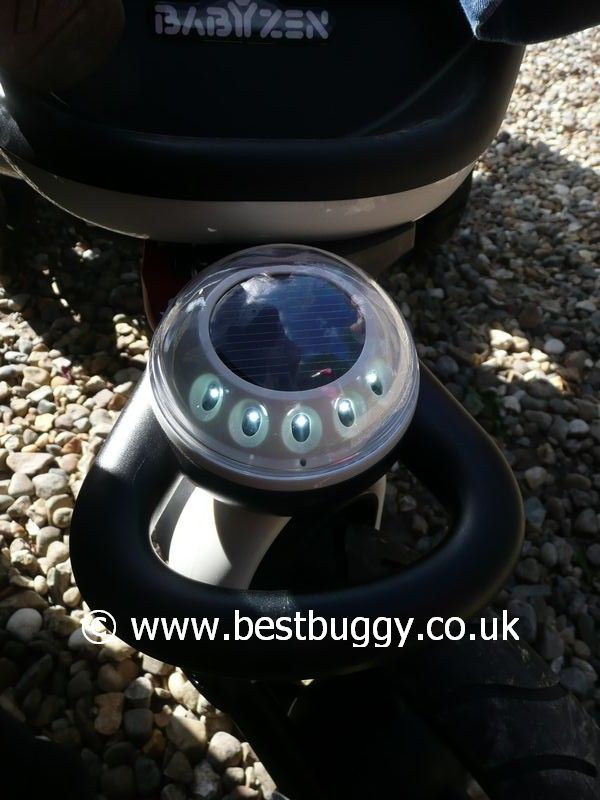 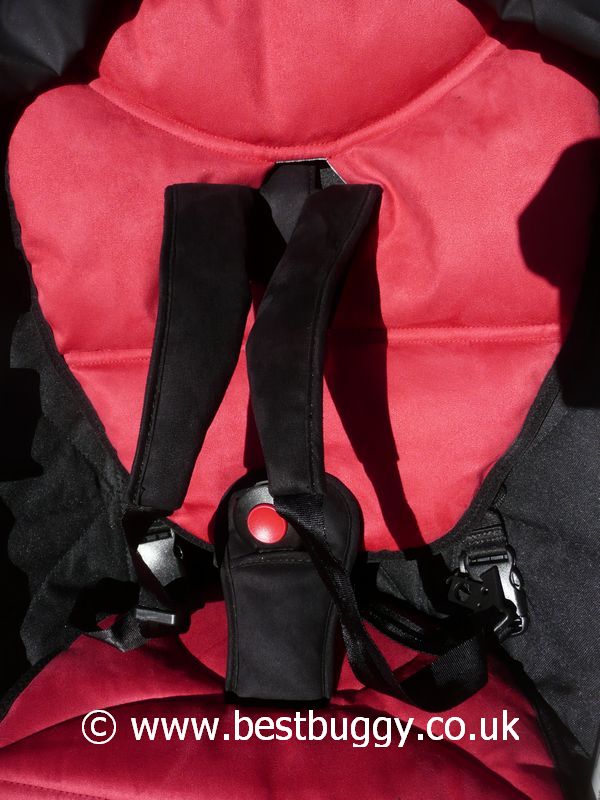 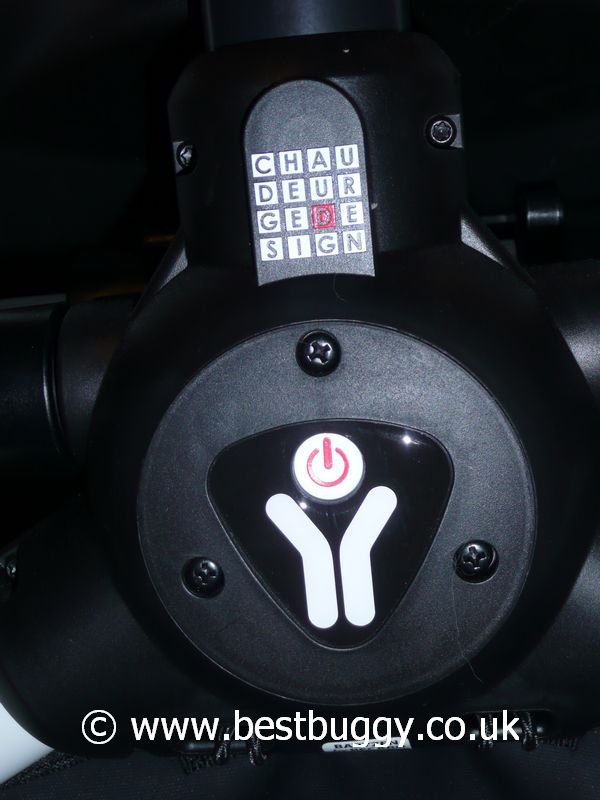 This photoset is a set of additional photos to highlight features and the fold of the Recaro Babyzen.

The main photos of the Recaro Babyzen are on the statistics page at the bottom.

These photos show what the Babyzen looks like folded, and how it unfolds. Unusually the pushchair opens initially on its side, but Recaro have thought about protecting the chassis and on the elbow joint that touches the floor there are tiny white wheels which the pushchair sits on, and can be pulled along on. Although the unfold may look complex, it isn’t: simply turn the handle, release a red button and the pushchair pulls towards you until it is standing on its wheels and the elbow wheels. Finally stand the pushchair up, put the handle up, stand the hood up, release the seat , zip up the two side seams, and hook on the two red loops. It sounds like a lot of steps, and yes it is, but they hardly take any time and can be done one handed. I find folding a little trickier. You reverse the first sequence ie red loops off, unzip the side seams, fold down the seat, fold down the hood and handle. Then stand the pushchair on its end. The tricky bit is ‘catching’ the sides of the pushchair as the wheels fold in. It’s not hard, and if you miss you just try again, but its a case of getting the angle and motion exactly right!! But its a beautiful fold and is jaw dropping when people see it!!!

We love the light on the front of the Babyzen. It is rechargeable via the solar panel on the top of the pushchair. Should that not be enough there is apparently a AAA battery hidden somewhere which you can replace! The light may seem like a gimmick but as I have said before it could be very useful if you live where there are no footpaths in winter, or even if you have a dark drive or footpath to walk up to get to your house. I think it is a great idea. There are permanently on and flashing light modes. Our only niggle is that it is very easy to accidentally turn the light on from the handlebar – or more annoyingly for your children to switch it on and for you not to notice! There is an indicator light on the handlebar but in bright sunshine its impossible to see whether the light is on or not. However, there is also a master power off switch hidden cleverly under the pushchair!

The Recaro Babyzen seat reclines using two sets of zips. It does not recline to flat, but the reclines are good.

The Babyzen seat pad is very thick and luxurious. There is a choice of a cherry red side which is flat, or a silver (more like pale grey) side which is textured and soft. The harnesses are unusual….they emerge from the centre of the back of the seat and then go over the child’s shoulders. It took a bit of getting used to, but we like the way the harness sits on the children’s shoulders. The harness adjusts very easily. However what we find very annoying is that the harness easily slackens off, and during an outing I have to retighten the harness a couple of times as it becomes loose around the waist, and thus also eventually the shoulders as they are one strap for each side that runs through the buckle. The buckle is a good solid one, however it is a bit fiddly to put the two parts together to strap a child in. I love the suede harness covers – they are lovely and soft. I have been amazed how easy they are to simply wipe clean – I am assuming the fabric has been protected.

There is only a small basket on the Recaro Babyzen which is a bit of a shame, but at the same time, we love the tiny fold, so there has to be compromises. But we can get a bag of shopping in it.

We also are not keen on the hood – its huge which is good – but its also thin fabric and blows around in the wind. But again its probably a necessity because of the amazing fold. The hood can very easily be removed.

The raincover is fantastic at the front – it fits on really well and we are very impressed by the thought that went into it. However there is hardly any length at the back and this causes us an issue, as our baby likes to do his hardest to kick the raincover. His continual kicking eventually pulls the raincover off the back of the hood and so we have to walk along hanging onto the top edge to keep him from getting wet! After a bit this all becomes very tiresome!! A raincover which went further down at the back, simply to keep the front down a bit would have been very useful!

The Babyzen is fab off road. It deals with gravel, bumps, grass, rough ground, kerbs and uneven surfaces straight. It is one of the few pushchairs that we can push straight into our house as most get stuck on the paving stone / door lintel. The handlebar feels great to push. Mr BB does complain that he kicks the back wheels as he walks along, but he still chooses to take this pushchair out over other single pushchairs which must say something for how much he does like it!!!

Both my children sit very comfortably in the Babyzen and we like it a lot!