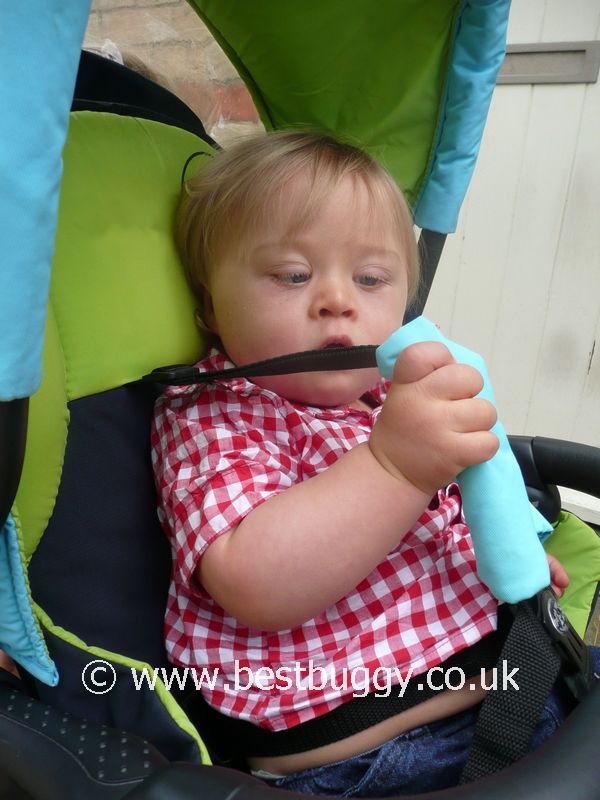 The Jane Powertwin Pro is a pushchair that generally I have heard good reviews about, so I expected to like it. However the Powertwin Pro just didn’t work for our family.

This photoset shows some of the reasons why. Our biggest gripe is that the front footrest is a very short distance away – just 14cms – from the knee of the front child. As the photos clearly see, this has caused an issue for our 2.10year old. She either looks uncomfy with frogs legs or Z legs with her feet on the footrest, or she ends up dangling her legs around the front wheel. On one photo she even has her feet behind the front wheel which could be dangerous!! She struggles with head room under the front canopy too. She doesn’t look comfortable at all in the front seat.

The 12 month old seems more comfortable in the front seat although he too did dangle his feet off the side of the footrest at times and his feet too were too close to the wheel for my liking, especially when reclined. When reclined, I think because of the lack of foot support, the 12 month old looks to be uncomfortably slouched in his seat.

Both children fared better in the Powertwin Pro’s rear seat which is higher off the ground. There was no danger of either of them hurting themselves because the footrest was above the basket. The rear recline was good but not flat. The hood height was higher and all round both looked comfortable.

I had a real dilemma in using the Jane Powertwin Pro because the eldest child simply was not safe having her feet so close to the wheel. Pushing from behind I was unable to see where her feet were. Equally I was not happy that the front seat was supportive enough for the baby who inevitably falls asleep within minutes of leaving the house. But I took the decision that safety came first and the elder went into the rear seat with the baby in the front. This decision was fine for the test outings that we did with the Powertwin Pro, but as a permanent pushchair, I would have been unhappy with a compromise such as this. I like a double pushchair to meet the needs and comfort of both children well, even if there is a compromise for the adult. But this ‘where to put which child at what age?’ dilemma is one that I have seen  is common to a lot of stadium style and tandem umbrella fold pushchairs. If you are considering a stadium style pushchair then it is something to think about for your particular age gap. I am not entirely sure that this is a good choice for twins either because of the different seats / leg rests, reclines etc. although of course it is one of the few pushchairs that will take two car seats for twin babies.

My other big issue was with the harnesses. On our Powertwin Pro, the harnesses were huge even tightened up to the maximum. One of the photos shows the baby pulling at his and its clear the enormous gap. A harness has a purpose – to keep the child safe and secure. These harnesses did not fulfil this purpose and a child could easily have been thrown out in an accident.

I wasn’t keen on the plastic panels in the Powertwin Pro hood. On the day these photos were taken it was hot and the sun felt hot through the plastic. I found the hood fabric too voluminous at the rear of the seats as well. The rear hood is very large but the front hood is relatively shallow.

Pushability wise the Jane Powertwin Pro felt good. It took the weight of the children well and drove in a straight line. It went straight over our thick gravel easily and handled a normal shopping trip well.

We liked the handbrake for hills but also that there was still a footbrake. The Jane Powertwin Pro is often suggested as a good off road pushchair. I have to say, although it handled well across rough ground, grass etc. I was worried about the stability of the pushchair in places especially when doing tight corners, and I am not convinced I would want to do any serious offroading with this pushchair. For that I would choose a side by side.

The other feature that I often see mentioned is the Jane Powertwin Pro’s compact fold. The Powertwin is a very slim pushchair but I did not particularly find the fold compact. There is a photo on an earlier post showing the Powertwin in the boot of the car and the pushchair pretty much fills our large boot. But equally I do know the Powertwin does fit in some small car boots when other double pushchairs haven’t! I think it is just an odd shape. We did try to remove the front wheel but could not find an easy way to do it because of the brake on the front. The front wheel was also tricky to fold in as the pushchair folded – the pushchair stopped part way through the fold and we then had to fiddle with the wheel to get it tucked under correctly.

There is a large basket under the Powertwin with an air pump strapped in.

Sadly, this is quite a negative review. The Powertwin may be well loved by previous reviewers, but it simply did not work for our children with a 21 month age gap. I really hope that the harness and front footrest issues will be looked at and that improvements will be made to make children safer in future.