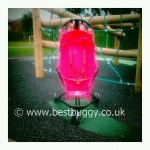 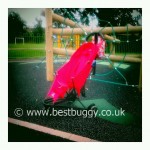 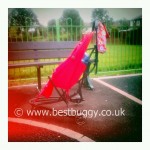 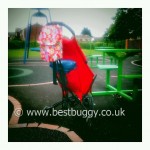 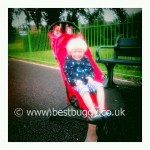 The Quinny Yezz is a really cool design. It looks funky and our Yezz is a lovely red.

The Quinny Yezz pushed easier than I’d anticipated. The Yezz was noisy to push (like a scooter) but was easy to push and made very light work of transporting a 4y old! The Yezz was fine to push even on older rougher pavements and was easy work despite a four year old on board. It was ok on mown park grass. I would definitely use the Yezz for town based activities…or even the school run say there’s a concert or something, and you need a buggy out the way when you get there. The Yezz folds nice and neatly and is a handy buggy to have also for longer outings especially if an older child will mostly walk but could need a buggy at some stage of the day.
My 4 year old looks comfortable in the Quinny Yezz and he has a lot of growing room still. He has better posture and comfort in this than he would have in a Maclaren. I like the harness quality too. Overall it does feel and look very well made, which I like. I don’t like cheaply made buggies. This feels strong and looks well finished.

I did find I kicked the back of the Yezz a lot. I have a long stride. I had to modify my walk…or push one handed and walk to the side of it, but as the Yezz was whizzy and manoeuvrable this was fine.

The Bagabottle pouch was a useful addition on the back of the Yezz…plus when the child gets out, you can the pouch forwards so the buggy won’t tip (assuming you have wipes, large purse, keys, iPad in there to make it heavy). My post office parcel fits in the pouch at the seat back ok.

But all round you can see my son is comfy in his Quinny Yezz!