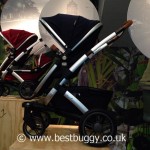 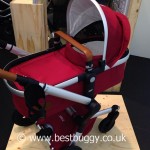 The first two photos here are of the Joolz GEO pushchair which has a hidden secret – the huge basket can be replaced with a second seat, making it a tandem pushchair for two children!!

There appears to be a framed seat on the Joolz GEO. This appears to lie flat for a newborn baby, but to also have a hinged back rest so that a child can sit upright. However it appears that the child has to have their legs out in front of them – like being on a sun lounger! Look carefully at the GEO pushchairs in the background, as well as the foreground, of these photos.

The Joolz GEO has a very neat fold as shown in one of the photos above.

The last photos are of one of the stunning new Joolz Day Earth Collection colours – Parrot Red; and also some close ups of the new Joolz Day Studio Gris.