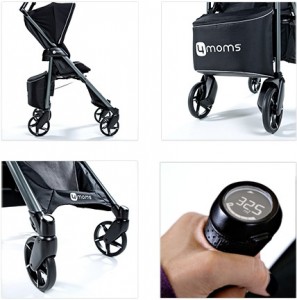 The 4Moms Origami Mini is a power folding / unfolding pushchair which weighs an astonishingly light 7.25kgs!!!
The Origami Mini has daytime running lights. The Origami Mini can charge a mobile phone as you walk and has an LCD display. There is a 3 position recline and a large storage bag.

The 4Moms Origami Mini can be a travel system with the addition of a compatible car seat.

The Origami Mini should be available in the US at the end of 2014.

The price is going to be under $450 although we do not know yet what the price will be in the UK.

Please note that the finished product may be subject to change from the photos above.