The Harrogate Nursery Fair is always a busy time for us. First the preparation and building new webpages as each new pushchair gets announced. Then we have to work out where all the pushchair stands will be located in the massive Harrogate International Centre, and plan appointments and a route to take.

I usually go on the Sunday to ‘work’. I do the bulk of the photos, demos, measurements etc. on that day. The children and Mr BB have always come on the Monday to have a more relaxed wander around, put the children into any pushchair seats, and take more photos etc.

This year Little Miss BB is now in school, and so could not come with us on the Monday. Whilst we knew there were some new pushchairs we wanted to see, there really was not as much as in previous years. Little Miss BB had been upset that she had to go to school whilst Master BB came with me on the Monday. So we decided to go en famille, on the Sunday on the understanding she was very well behaved. Last year, we had not realised how seriously ill she was becoming, so it was lovely to be able to go this year and be able to put the past behind us.

The Harrogate Nursery Fair is massive. You could easily spend 3 days there and not see everything! There are very few seats, and refreshment stations are widely spread. It is absolutely exhausting for the adults, never mind the children. Simply trying to get to somewhere where we could all sit down and have a drink was a challenge. By lunchtime, we were already tired. The children were both absolute stars at being patient and waiting until we could get somewhere to stop. We eventually sank into a lovely comfy sofa to eat but Miss BB insisted instead on taking photos from the friendly men from Trunki!

I have to say, both children were extremely well behaved all day long. I had a brain wave before I left to take Little Miss BB’s camera with us, and she happily snapped away all day long. It was hilarious in places seeing her place pushchairs in precise positions (especially the Britax stand) and how she huffed very loudly when someone moved an iCandy Raspberry just as she was about to take a photo. I loved how various people posed for photos for Little Miss BB. Everyone was so kind and tolerant of her, and she had an absolute ball. 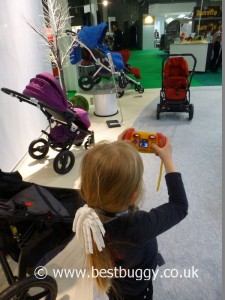 Master BB, was happily tucked up in his Easywalker MINI stroller until the point at which he spotted a Little Tikes Cosy Coupe! He then started frantically trying to undo his harness whilst signing ‘please, please, please’! He was duly released and the two children had a great time with the car on the Diono stand. 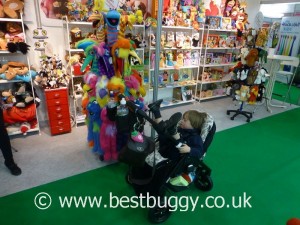 We downloaded Little Miss BB’s photos last night and its interesting to see the world from a small person’s perspective. Most of the photos are blurred, but some are great and have tickled us no end! 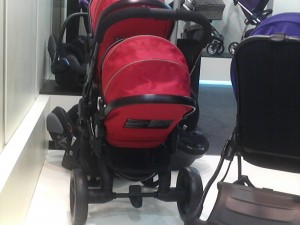 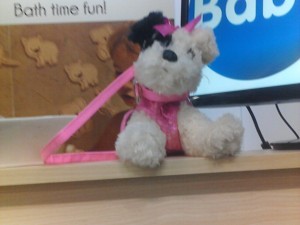 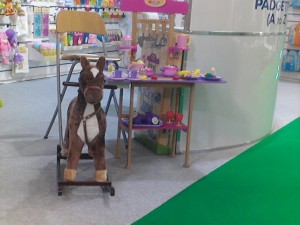 We liked when she added effects on!: 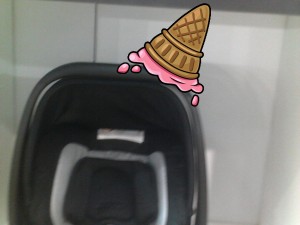 It wasn’t all work, work , work! There was ice cream: 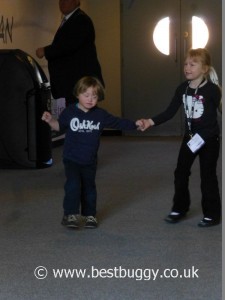 And we can’t leave without a mention of the lift which not only had traffic lights outside, but also had enough room inside to play a game of football! Wow! 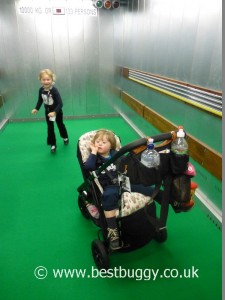 A HUGE thank you to everyone who made our two children so welcome on their stands. Thank you very much to the companies who very kindly gave the children various toys, including Breathable Baby, and to J.L. Childress for the fab stroller cool bag. We can’t wait to try it out on our next outing.

Harrogate was absolutely exhausting. We discovered some fab new products, caught up with old friends and had a great day out. However compared to previous years there was less to be excited about, and to be honest the sheer size means you are too tired to go into every hall. For the first year there was not enough to make me want to go back another day. I really wish the organisers would put similar type products together, because the products we did not see, were the ones where they were a lone pushchair company in one room on their own. It was noticeably quiet – two stands were busy all day, but everywhere seemed quiet – maybe it was because people were thinly spread across the whole site.

What were our Best Buggy highlights? The iCandy Raspberry, the Baby Elegance Sketch, the Doona, Britax Go, Greentom and the Recaro Easylife. We are also excited by the whole range of reasonably prices pushchairs coming from Babystyle – the Oyster 2, the Lite and the Jule. We were pleased to see the old slippery harness on the Recaro Babyzen has changed, because this was the reason we got rid of this fabulous pushchair. I think Mr BB is now secretly hankering after another one.

Personally the warm welcomes we had from everyone were lovely. Especially from MeeGo, iCandy, Clair de Lune, Britax, Graco, Kiddy, Whitestep, Diono, Casual Play, JL Childress, the puppet lady, Annette, Kevin, the men with the purple and pink stripey shirts (!), the lady from Breathable Baby and more….
Thank you everyone for making Harrogate a great day out for all the family!