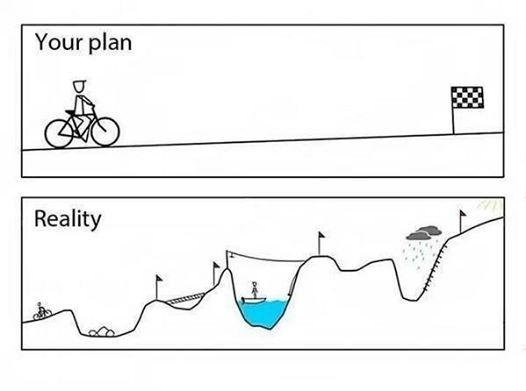 The picture above was posted by a friend on their Facebook page. My apologies to whoever owns this image, but we hope you don’t mind us using it.

The picture above represents Type 1 Diabetes well. You have to aim for your blood sugar readings to run in a straight line – ideally a horizontal one rather than an incline. However, I bet no diabetic would quibble at any the straight line above!

The reality is quite different though. The problem with Type 1 diabetes is that high and low blood sugars can affect cognition. It can take 2 hours for the brain to get back to normal following a hypoglycaemic event (hypo). High blood sugar causes Little Miss BB to be irritable, thirsty, hungry and cross, which affects concentration. So trying to keep her fairly stable is important for her to work well at school.

Our new Abbott Freestyle Libre is helping us to understand what is happening to Little Miss BB’s blood sugars all day long. Thus we are able to chart what is happening, and pin point when foods are releasing energy and how long the insulin is working for.

These are some of our graphs from the last 2 weeks. What I want to highlight is that by using Libre, we discovered that Little Miss BB’s blood sugars were high after breakfast (the green circles), as her breakfast released energy around 10-11am. She then had insulin for lunch, but the insulin was hitting her system faster than the food was digesting. This was sending her blood sugars low approx. 1-2 hours after lunch (depending on what she ate) (red circles). Then mid afternoon, her blood sugars would rise, sometimes to alarming levels (purple circles). 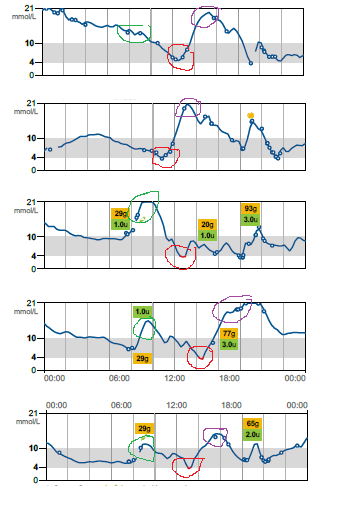 If you look closely at the last graph, you will note that there are less high’s. This is because we were able with the use of Libre to experiment with insulin doses and times to make the graph flatter. A flatter graph means that Little Miss BB’s health is better both during that day, but also long term. The next two days produced only small bumps at breakfast time, and a final tweak reduced the post lunch peak to a two bumps. Importantly there were no low episodes during the school day. 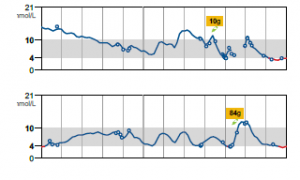 We now need to sort tea out, but it is a huge positive that we have been able to have this much effect, on the well being of our daughter, by using Libre.
Just to add, the red line at either end of the bottom graph shows that Little Miss BB was on the low side – however, our Libre is less accurate at this bottom end of readings, and always gives a lower reading than it actually is. It is very accurate in the numbers above 5. She was actually perfect when we checked. The Libre is working great as an early warning system because of this! We can actually stop a hypo happening.

*Edit* DD has just come home from school and this is her graph so far today:

It is just a shame that her second dose of insulin after lunch was forgotten, because the first half of the day is a lovely flat line (she started high because we got it wrong last night, but she came down nicely). 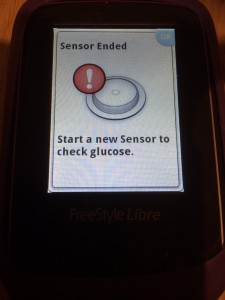 Trying to remove the sensor was not the best experience. It was very firmly stuck down, and even a swimming session and Lift Plus didn’t help.
However, once we had removed it, we had a good look at what the sensor was like. This is the top:

Underneath it is possible to see the battery and workings of the clever Libre:

There was a layer of sticky ‘tape’ which came off when we removed the sensor:

Looking closely at the sensor, it is possible to see the tiny golden sensor embedded into the flexible filament in the centre:

We bought Libre to try and reduce the number of finger prick tests which Little Miss BB has every day, and to help her little fingers recover. However, we didn’t expect the level of information which Libre gave us, and how much it has informed day to day decisions about Little Miss BB’s care and medication. We never expected to be able to ‘experiment’ with tiny changes to see the effect and work out what dose or timing was therefore the best.

We also were extremely grateful for Libre when Little Miss BB was either very high, or very low. Libre allowed us to literally scan Little Miss BB every minute if necessary to stop her going too high or too low. It allowed us to hold off decisions until last minute if we needed to, or equally to react more quickly if that was a better plan. Each scan meant one less finger prick test, but also the ease and pain free scanning meant we were checking more regularly, which can only be a good thing.

We saw our diabetic team yesterday. They understandably had to sit on the fence because Libre is not licensed for under 18′s. However, the consultant enjoyed finding out more about Libre. Our dietician is coming tomorow to help us interpret the rest of our graphs and sort our tea time bumps out. We hope that Libre will be licensed and available on prescription soon.

So, at the end of the first two weeks, are we continuing to use the Libre?
Absolutely!
We all LOVE the Libre!

*EDIT* this was the following day! The line is getting even flatter! Sorry it is so small.