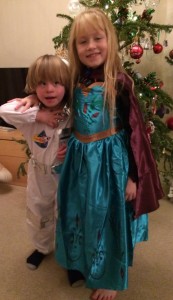 It has been a crazy year in the Best Buggy family. Life literally does not stop. There is always somethings to do, and even when you think you can see light at the end of the tunnel, something else happens. This year has been exceedingly tough for many reasons and quite frankly I am glad to see the back of 2015. It has been one thing after another, but notably an installation of Windows 10 which left my computer unstable for months before finally crashing it for good. It took a long time to recover and be working again, and I am still unfortunately trying to catch up.

The children take up a huge amount of time – more than typical children. In the penultimate week of term I had three hospital appointments and three meetings with school plus two nativity plays. The children are now on holiday and as any working mum will know, it is difficult to work with children around. Childcare is a very difficult option when both children need a huge amount of support. But Best Buggy is built around the children, and the children always have to come first. This year I have enjoyed some really lovely time with both children.

The landmarks of this end of 2015 are that Master BB has settled into school brilliantly well. He was fortunate enough to keep his wonderful 1:1 support worker which I am sure eased his transition into big school. School was already a familiar environment. He is now 5 and a half and can write his name and is reading really well. We have used the Down’s Syndrome Association ‘See and Learn’ system to teach him to sign for words as he reads. He can read around 40 words now which is excellent for any child in Reception, let alone one with additional needs. He can match numbers to objects. He has learnt to dress and undress himself completely apart from fastenings. He importantly has discovered his voice and has a desire to communicate his needs. It’s 2 years since he got his BAHA (bone anchored hearing aid) and we recently were fortunate enough to obtain a double BAHA for him. Between the amazing input of his 1:1; having improved hearing and also using an amazing system called Gemiini, speech is finally emerging. Gemiini is an incredibly repetitive and boring set of videos where the same word is repeated over and over. Each video needs watching at least 40 times. It drives me nutty, but it appeals to Master BBs love of the iPad with something familiar and engaging. They say children have to hear a word something like 40 times before they will attempt it. And right on the prescribed 40th play of the first video, Master BB said ‘lizard’ – a word he hasn’t met anywhere else. So it’s no coincidence! This has been followed with ‘Christmas tree’, ‘Father Christmas’ and ‘snowman’. Truly awesome after so long with no speech. I loved how the school nativity had Makaton signs to every song so that Master BB could join in! 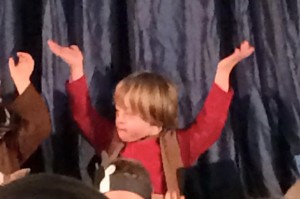 Little Miss BB is enjoying being in year 2. She is 7 going on 13! Her biggest desire is to be a teenager and believe me her negotiating skills are becoming more highly tuned. Her maths is better than mine which is brilliant for carb counting for her Type 1 Diabetes. She is one hell of an amazing girl. No matter what I throw at her, it seems to be water off a ducks back. I am extremely proud of the way she handles anything and everything.
It is over a year since we took the very expensive decision to invest in the Freestyle Libre to help Little Miss BB with her diabetes. I invested a lot of time – about an hour a day – in checking her graphs, keeping food diaries and fine tuning her insulin etc. But the hard work paid off when Little Miss BB’s Hb1Ac levels were twice at 48 which is the magic ‘non diabetic level’ which gives her hopefully the best possible outcome for long term good health as an adult. However, we needed to take the Libre a step further and invest in string which would alarm us when Little Miss BB was low or high. Some children are fortunate and get CGMs funded by their hospitals. This year I have been seeking funding for Little Miss BB to get a Continuous Blood Glucose Monitor. No matter what route I went with the NHS or the Local Authority, I could not get one funded locally. I tried several charities which said they helped children with medical conditions. However, after a run of bad nights where I was up every hour, on the hour (I literally set my alarm for 1am, 2am, 3am, 4am, 5am) to scan / test Little Miss BB, I realised I couldn’t continue like this. I was exhausted and it was affecting every aspect of life. I needed a CGM which instead would alarm me, instead of me having to get up every hour. I knew that with some compromises I could afford to pay for the long term running costs, but the initial set up cost was £1350 approx £500 extras. This was beyond our reach.
A week prior we had attended a local bonfire where the Lions club were present. I remembered something that our old Health Visitor had said about the Lions often supporting funding requests for specialist equipment for children who needed something. So I wrote via Facebook to two local Lions clubs and to two local Round Table groups. Two came back and said they would certainly consider the request, but the Wakefield District Round Table 1088 came back to us within hours and said that they would very kindly fund the set up costs for the CGM for Little Miss BB…and not only that, they had already ordered the CGM starter kit for her. I sat staring at my PC and cried. I know that I had asked them for help, but the fact that people had cared enough about a child that they had never met, to help her, and us out, was overwhelming. The relief was enormous…absolutely massive…and we are so incredibly grateful to all the amazing people who helped raise the money to help us all. We are so thankful. 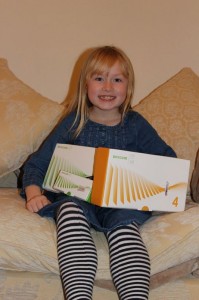 The CGM starter kit, was literally the start though. First of all, there are ongoing costs every month – these could be as high as £300 a month, but the longer each sensor lasts, the lower the costs are for us, so keeping the sensor stuck onto Little Miss BB’s arm, is paramount! One of the reasons we wanted a CGM was to give Little Miss BB more independence. We realised that not knowing her blood sugar reading was causing anxiety. Plus Little Miss BB needed watching all the time at school, at Rainbows, at parties etc.. She has certain limitations placed on her because of her diabetes, which we wanted to remove. So, it was vital for us, that we joined the Nightscout project to give everyone the information we required, whilst giving Little Miss BB more independence and control.

The CGM (Dexcom) has a limited transmitting range. Some amazing people realised that they could extend the range of their child’s CGM monitor by using the internet, a mini computer called an XDrip and a mobile phone. The result is Nightscout. This is the kit below. We have an X-Drip in the top right hand corner – with the blue light and electical components. This, and the Dexcom (beneath it in the black case) reads off the transmitter on Little Miss BB’s arm. We have in total 3 mobile phones and 3 paired watches – one for Little Miss BB, one for me, and one for her TA. It is possible to read off a website or another mobile without a watch as well. Little Miss BB has to carry around her tiny Melrose phone (top middle) and the X-Drip in a pouch around her waist. She also has her insulin pouch, so it is a lot of kit for a 7 year old. 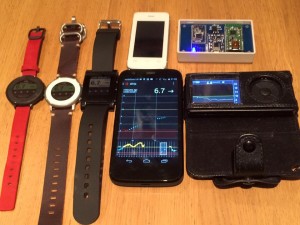 We are approx 7 weeks into Nightscout / Dexcom now. There are lots of things we prefer about the Freestyle Libre (better graphs, touch screen etc.) but the alarms of Dexcom have been life changing. The value of Dexcom really showed when Little Miss BB was hypo at 3am in the morning – something I could easily have missed. However, the Dexcom alarm woke me up so that I could treat her. I still get up a lot at night to treat Little Miss BB, but the equipment now alarms me, so that I don’t have to set alarms in anticipation – I only get woken when the alarm sounds. I have the graph by my bed at night, so that if I wake, I can see at a glance where Little Miss BB is. 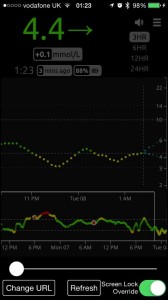 Technology like this is amazing and we are grateful to the Wakefield District Round Table, and to the Nightscout Foundation and those who helped us set everything up. Setting the above up took several weeks of hard work, but it was worth it.  Just to add, the Wakefield District Round Table are also directly helping Master BB, because they have donated items to assist the local Down’s Syndrome Group’s Speech and Language Groups, and have offered to next year to raise more money so that the speech and language therapy groups for longer. What an awesome group of people they are. Thanks everyone.

The icing on the cake was when another local Round Table Group said that they wanted to surprise the children by bringing Father Christmas round on his sleigh. The children could not believe their eyes and it was magical. 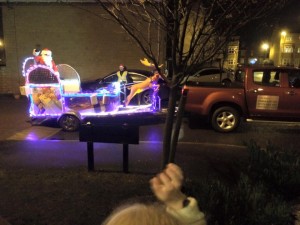 Little Miss BB has also started Brownies. She loved Rainbows and I hope she has a happy time as a Brownie. 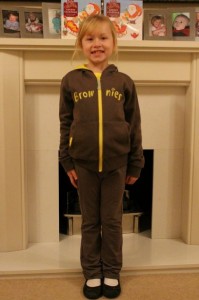 Christmas has been very traditional. A real Christmas tree, presents, parties, and lots of time playing at home. The children got lots of lovely things. Master BB got his own iCandy MiPeach pushchair after the one that we got from iCandy was so popular that I realised we needed another! Master BB loves building and got lots of construction toys. Little Miss BB was happy with her Disney Lego, Little Live Pets and a pile of books amongst other things. Both children got a new bike. I was delighted to get a piano for me and for the children. 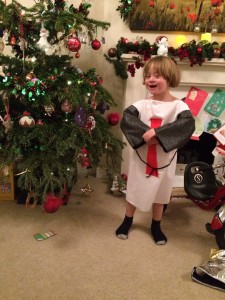 The year ended with the wedding of two of the nursery industry reps that we have got to know over the years – Katie and Chris. It was a beautiful, Christmassy wedding in a gorgeous church, followed by probably the best Reception we have ever been to. It really was a treat to see such a great couple get married. We wish them a long and happy life together. 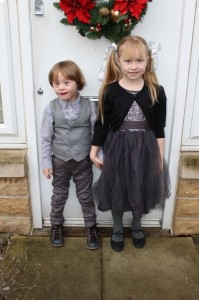 I will be honest and say there is so much I would like to say, but my time is so short, and I just wanted to round off the Blog for 2015. It is time to move forwards into 2016 with the hope that the new year will be much better for us. Thank you to everyone who has supported Best Buggy in any way in 2015. We hope that you have a great 2016!