Mountain Buggy + One Review from Harrogate Nursery Fair, 2011 by Jus 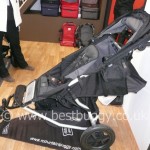 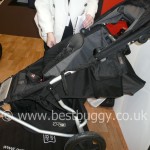 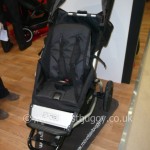 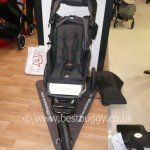 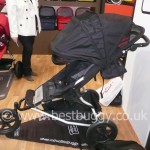 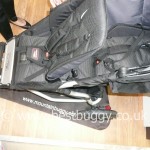 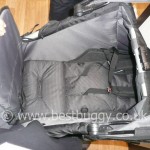 Note: We didn't poke the crotch harness through the holes. Also note the bar at the back. 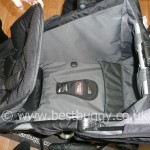 Note the foot well. It goes a long way forwards for big feet!

When I first saw the new Mountain Buggy + One inline pushchair I was excited. I scoured the internet looking for photos, tried to work out how it was going to work, checked out details of the Urban Jungle on which the + One is based to find out sizes etc. I managed to piece together that is was similar to a Phil & Teds but the second seat is above the first. However from afar I spotted a flaw, and in real life I am sad to say it was even worse. But I will come back to that!

My initial intrigue was the back seat – How did it work? Where did the child put their feet? How did it work for a baby? If you look at the photos you will see that there is a removeable seat pad with the shoulder straps fixed to it. We measured the seat pad and it was 28cms wide at the back joint of the pad and 27.5cms wide at the front of the seat. (You can see the pad on the floor in one of the photos). The front seat is 28.5cms at the back seam and 30cms at the front knee seam. So the The Mountain Buggy + One  has seats that are marginally wider than both the Duet and Duo which would make for a good sized “carrycot” type space for a baby. When you remove the pad there is a footwell. At first I thought there is no way my Size 8 shoed 2 year old would get her feet down into it because the gap looks tiny, but when I put my hand under the front seat, the foot well is actually a good size. BUT as my husband pointed out, being able to so easily kick the front child would be a game that most toddlers (or even older children) I am sure would indulge in at some point! Leah pointed out that it was also very easy for the back child to lean on or push the front seat forward. Being kicked and pushed could possibly make an outing not much fun for the front child especially if its an older baby who can’t tell you that their sibling is being a meanie in the back (and with the hood up it would be nigh impossible to see what’s going on in the front!)

With the back section zipped up, the seat pad sits well resting on the bar at the back underneath the hood. There’s a fair bit of space for the back child but as I said above there’s plenty of scope for mischief, hair pulling etc!!! BUT THERE IS NO recline on the back seat. The front seat reclines but then there’s no room for the back child!!!!! So, you are left with two seats which only sit bolt upright with two children in them!!  The Mountain Buggy + One pushchair does literally live up to its name – its a single pushchair which has options for a “plus one” but I honestly can not see how you would use this pushchair from birth to five or six or whatever the maximum weight capacity it. So its great for a toddler who you don’t expect to be in a pushchair for more than 6 months after their new sibling arrived and then you need a good all terrain pushchair for a singleton (its easy to zip the back section away), or you have say an older baby who is fine sat up for short journeys but its not a long term all day outing pushchair where the baby is likely to fall asleep. But as I always say you choose a pushchair to suit your needs but its a major flaw which as a reviewer I need to point out clearly.

So, for a baby, you unzip the back section which then lowers down to horizontal. You lie the seat pad completely flat. I love the fact the baby has a harness because after seeing a 6 week old catapulted from a pushchair years ago, I try to have a proper harness on a baby. We were told that the Phil and Teds cocoon would fit nicely into the space if you wanted it, but to be honest there probably wasn’t a need – I would have happily put my baby straight onto the pad, with harness and tucked a blanket round them. But its always good to have options and there are D rings inside. I am sure other soft cots, the Bugaboo cocoon etc would all fit comfortably.

The hood on the The Mountain Buggy + One  itself is big. There are also two sections which unzip revealing ventilation panels thus extending the hood for sunny day to cover the front child. But the the mesh is no use for a British winter or for protecting a child from the rain and wind. But is the second big flaw for me:  at the back of the hood there is a huge opening (see the photos) between the top of the hood and the bar at back of the second seat. Whilst I appreciate The Mountain Buggy + One goes all over the world, I know I wouldn’t like to expose my newborn baby to the bitter winter winds whistling through the hood when ideally I would like them snug, warm and cosy under a good hood.

Just like the Mountain Buggy Duet, the harness slides really nicely up and down for adjusting. I love the red button buckle release that makes it easy to see where to press. There’s a good storage basket and a bottle holder on the side which is a feature I love. I like the fold down height adjustable handle.

The Mountain Buggy + One  that we saw was a prototype – so we weren’t allowed to fold it down. I suspect though you would get a good feel of the fold by studying how the Mountain Buggy Urban Jungle folds. Like the Duet, I suspect the footplate will also be made of metal when it is finally released.

So all round the Mountain Buggy + One gets a mixed review. I actually really liked it. It was a good looking pushchair and good quality. Just like the publicity photos show, I suspect its a great option for say two 2-5 year olds, or older twins depending on the weight capacity which I believe will be up to 44lbs. I would have to choose my back passenger carefully though! But as a pushchair to see you from birth to school age, it wouldn’t work unless your baby was happy sleeping bolt upright. But its a pushchair I would definitely consider moving onto once my baby was 18 months plus and I had an outdoor lifestyle, or even if I just needed an occasional seat for a weary toddler that I could unzip out as necessary, or even possibly for putting the the weekly shop in the back seat after dropping the older one at school!!!!!

Other Mountain Buggy +One Reviews: