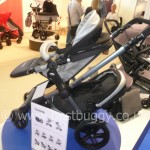 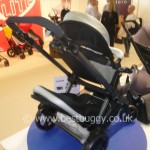 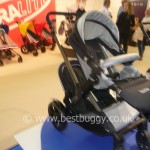 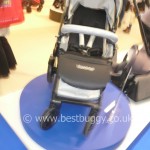 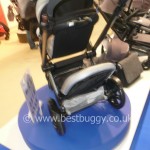 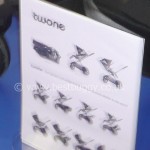 Before I begin I have to stress, this is pushchair is not currently for sale. The pushchair we saw was a prototype model. It was also on a revolving stand that couldn’t be stopped nor could the pushchair be removed so apologies for the blurred photos! I also don’t know much about this pushchair so this is speculation based on what I saw.

The Jane Twone appears to be a tandem with an upper seat and a lower seat. It seems to be well thought out in that the lower seat is well underneath the handle so you should be unlikely to kick the lower seat as you walk along. The weight of the main seat is central so hopefully this pushchair should handle well. I like the hinged extending handle. Both seats have hoods. There seems to be plenty of space for the lower child, and indeed the lower child may even be able to see directly out underneath the upper seat. However there doesn’t appear to be any basket space in tandem mode at all.

The sign next to the stand says the Jane Twone can be used as a single pushchair, in both forward or reverse mode. In tandem mode the upper seat can parent face or face outwards too. However if the upper seat is parent facing, and the lower seat is upright, then there doesn’t look much room for the lower child’s face, but its hard to tell from a photo.You can recline both seats. The lower seat appears to completely lie flat, as does the upper seat, so this could be a great option for newborn twins. The lower seat appears to have four recline settings on it. This Jane pushchair is being sold as “Twone, the lightest and smallest twin and evolutionary pushchair in the world!”

The Jane Twone certainly appears to have a small fold, but there seems to be no sign of car seats in the photos, nor carrycots…but I appreciate its probably still early days for this pushchair….and we will have to wait and see how the Jane Twone progresses and I would be interested to see and hear why this pushchair is “evolutionary” given it appears at first glance to be similar to the Phil & Teds Verve, B-Dual and Hauck Duette.