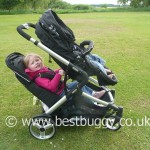 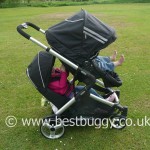 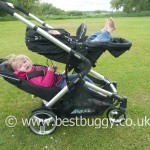 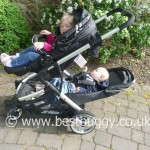 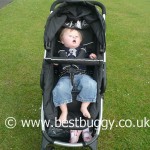 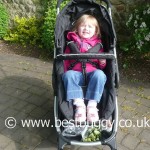 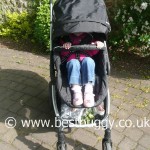 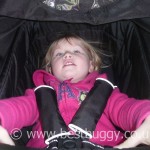 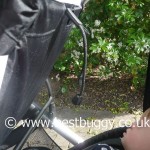 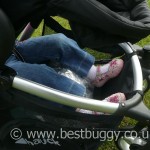 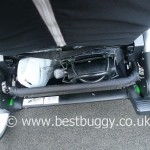 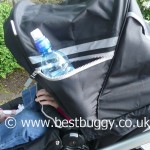 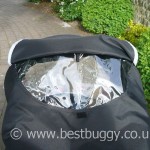 The Hauck Duett is a great tandem, neat, easy to push, with good sized seats and basket, all at a fantastic price!

The Hauck Duett feels like a single pushchair to push. The wheel base just 61cms wide which is about the size of a single pushchair and the Duett doesn’t feel long. The pushchair manoeuvres easily and goes up kerbs no problem. It does not feel particularly heavy at all even with two good sized children in it. The Duett handled well across rough surfaces, cobblestones, pavements etc. but I was unable to push it through the gravel on our drive. The ride feels quite “hard” because of the hard plastic tyres but I love the neat (if flimsy) wheelguards because they dont catch on doors as you pass through. I did wonder if they were long enough to stop a child putting their fingers in the wheels but I wasn’t going to test that out! The pushchair felt very stable even when the toddler climbed in and out (of either seat).

The seats are large and roomy with plenty of headroom for even for a tall 2.5 year old who looked very comfortable in both upper and lower seats. The upper seat is very padded and comfortable because this seat unit also turns into a carrycot for a newborn. The lower seat has less support especially at the sides – it is very flat – and I felt my 10 month old baby needed the support that the upper seat offers for napping. As you can see in the photos he did fall asleep quite happily in the lower seat, but I had to keep straightening him up. A head hugger would probably solve this issue. But I would recommend the baby goes in the upper seat.

The upper seat easily converts to a carrycot by unclipping two clips at the front of the seat unit and pulling toggles at the back. Hauck include a carrycot lining and apron with the pushchair and both of these take moments to fit. It is just as simple to convert the carrycot back into the seat unit. Our tall 10 month old looked very comfortable in the carrycot with room to spare, so it is a generous size, and very comfortable. The carrycot fits either parent or outward facing in single mode. In tandem mode the carrycot is not very practical but I will discuss that at the end. But this is a tandem that does convert into a single, but the Hauck unlike some tandems, does not look huge in single mode which is a positive.

There is plenty of room in the lower seat for the child. The seat has two recline settings as well as upright but it does not lie flat. I was concerned that I would kick the seat when it was on the lowest setting, but I did not. The two short carrycot toggles hang down the back of the upper seat but these do not dangle near the lower child’s face and in fact my eldest thought they were for steering with and created a great game of driving with them! There is a bar behind the lower seat which I was concerned would hinder of the movement of the lower child especially getting in and out, but it does not at all and in fact makes a great place for the child to hold onto or for you to hang toys to entertain a baby. The hoods are very large and the front hood has a sun visor as well. I like the swing away bumper bar on the upper seat. Very useful when you have a heavy toddler who wants to keep hopping in and out. There is plenty of leg room for the lower child. My toddler looked very comfortable in the lower seat and she enjoyed being in it. The fabrics all zip off and are washable which is useful.

There is a lot of basket space which is a necessity with two children. It would have been good to have had the front of the basket more enclosed so that you could load the basket up to the top at the front, because at present you are limited by amount you can carry especially with the toddler in the lower seat. However you can push shopping underneath the lower seat. I felt that the side zips on the basket were a bit unnecessary as the lower seat runners obstruct access via them. There is a small amount of room behind the lower seat for drinks, bottles, purse, phone etc. I love the side pockets in the hood for a drink, keys, snacks.

There are reflective strips all over the pushchair and harnesses. Fantastic high visibility for winter evenings and mornings, but when the sun shines on them you do get glare off the hood as you walk along! The foam covered handlebar has a good range of height settings and is very comfy to hold. It is one of the best handlebars I have held.

The brake is very easy to flip on and off with your right foot. Colour coded bars (red/green) on the inside of each wheel tells you easily whether the brake is on or off. I think its one of the best placed and easiest to use foot brakes I have used.

It has taken me some time to work out how to successfully fold the Duett, and I am still not an expert. In theory it is simple enough, but its not in practice. First you have to press a button on either side ie two hands and then nudge the seat forward an inch using your nose or chest! Then you can use the recline button to push the lower seat fully underneath the main seat. From there you press in a button on the side and the pushchair should collapse. But my Duett doesn’t seem to want to always respond – sometimes one side releases and the other doesn’t. Once you get the Duett folded, you need to keep pushing to get the flattest fold and then also to get the locking mechanism to click into place. I have to say, its not a fold I would want to do every day! However, when the Duett initially arrived I did have the pushchair out of the box, assembled and the children out of the door for its first outing within fifteen minutes (most of that was spent trying to fit the lower seat unit). It is easy to unfold.

The two negatives about the Hauck Duett are first of all the fold which is large with both seats attached. There is a lot of open space in the fold. But the biggest negative is that you can not realistically use this as a tandem for a toddler and newborn baby. Unless you have a very small age gap or placid toddler, your eldest is unlikely to want to be reclined in order to put the carrycot or car seat in the upper position. The lower seat does not lie totally flat and I would not consider putting a young baby in it due to the incline and lack of support. Therefore I would only recommend this as a tandem for children once the baby is old enough to sit comfortably in the upper seat ie probably 6 months plus. It is a shame that the upper seat is the one which really is the “baby” seat ie the one that converts to the carrycot, as if the lower seat had been able to lie flat, (with or without the carrycot feature) as the B-Dual lower seat does, then there would be greater useability for this pushchair and it would then be a fantastic tandem for a toddler and newborn. It is the one thing that really lets this pushchair down and I do hope Hauck look at ways to make this tandem into pushchair that is practical & useable for a newborn and toddler.

All round I have to say that the Hauck Duett is a fantastic pushchair. It easily competes with more expensive tandems for features, manoeuverability and storage space and it is one of my favourite tandems partly because it feels neat and narrow. Above all the Hauck Duett offers great value for money.