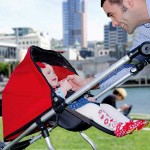 This new parent facing seat clips neatly onto the chassis of the Mountain Buggy Urban Jungle, Terrain and +One and turns your Mountain Buggy chassis into a parent facing pushchair for an older baby. The Face-to-Face seat can also fit onto the older Urban, Urban Elite (pre-2010) and fixed wheel Terrain (pre-2010) but these respectively would need the addition of either the Urban Jungle or Terrain ‘follow the sun’ canopies.

The fabric is easy to wipe clean.

The Face-to-Face seat has a 5 point safety harness.

The addition of two legs (included) will turn the Face-to-Face pushchair seat into ‘deck chair mode’ so that your little one can be sat on the floor in the seat when out and about. Frame connectors and a tether strap are also included in the Face-to-Face box.

The maximum load for the Face-to-Face seat is 9kgs / 20lbs which is quite low for a seat, which is suggested as being an add on seat after the baby has come out of a carrycot. Our son was on the 91st centile for weight and he was around 9kgs at just 5 months old. An average baby boy (50th centile) would be around 8kgs at 6 months, but a smaller boy (on the 25th centile) may well be a year old before they outgrow the seat. But this is something to be aware of when thinking of purchasing the Face-to-Face seat.

The Face-to-Face seat for the Mountain Buggy pushchairs, will retail at £49.

Other Mountain Buggy +One Reviews: