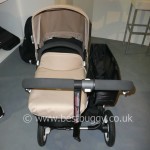 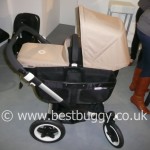 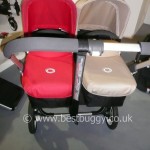 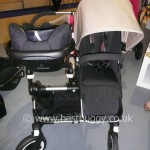 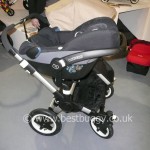 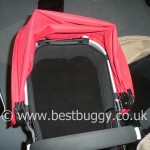 Note the quick release buttons on the bumper bar. You click one, then the other and remove one handed. 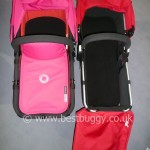 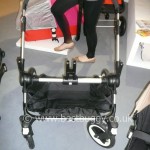 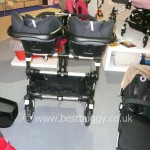 Note the double adaptor running the full length underneath 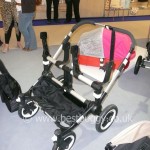 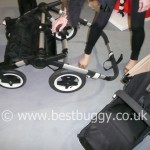 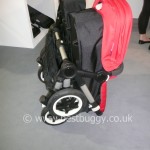 Even without the carrycots it is huge! 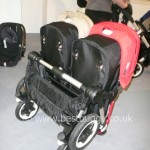 After pushing prams for 20 odd years, when it came to my first born I was determined to choose the right pushchair first time…and I probably did. I got a Bugaboo Chameleon. I loved it. It was neat, easy to push and always looked great. It sadly got sold for my first tandem pushchair. So the Bugaboo Donkey was a pushchair that reminded me of my much missed Chameleon and I have to say being stood in front of the lovely bright tailored fabrics I was smitten all over again.

The pushchair looks fab – I love the styling. The bigger chunkier all terrain wheels. The familiar handle bar – just that bit bigger. The fabrics. Even the shape of the carrycots. The beautiful colours like jewels to brighten up your day.

I had a few thoughts when I first saw the initial photo releases. First of all my daughter at a year old was hitting her head against the top of the Chameleon hood, and I wondered if this had been addressed at all. Secondly I had issues with my Chameleon handle coming loose and the whole frame collapsing on me. Because the handle flips over on the Chameleon the handle always seemed a bit rocky and when I bought my iCandy Peach the one thing I truly loved was the solidity of the frame. So the number of sliding, extendable parts on the Donkey was something I wanted to look at carefully.

I have to say the Donkey was an absolute dream to push. It glided…but with no children in the seats….but it was a lovely feeling to push a Bugaboo again. But I have back issues and I need to be able to lean ever so slightly as I push onto the frame. My Baby Joggers allow me to do so, no problem, but as soon as I leaned even a small amount on the handle there was a lot of give in it. I nudged Leah over to try and she said the same. It didn’t feel solid. But unlike the Chameleon, the pushchair doesn’t need the seats to lock the frame into place which was a real positive. The joints however seemed sturdy which I was pleased about. There are three simple locks (like the Chameleon handlebar ones) which you unclip. But it does involve running around the pushchair doing the front, middle and back clips and then giving it a big pull. I have to say it wasn’t exactly elegant and I can’t say its something I would do unless I needed to. But it also wasn’t hard although I needed help. The handle extension on the Donkey was enormous!!! I have never seen a handle go so low or so high on one pushchair! We whipped our tape measure out and the extension piece alone was 27.5cms long. Our rough measurement of the handle was that it goes from 87.63cms to 106.68cms high. The rep told us that unlike the Chameleon, the Donkey has rods of metal inside the extension pieces to give it more rigidity. The extension pieces are also on a rachet type system of grooves and you have to get the extensions to the correct positions to lock to stay firm.

So we started out with a single seat and basket in single mode. I have to say the basket wasn’t that bad in real life as in the photos. It will sit on in both single and double mode. But as several people said as we walked around – it really does look like the perfect place to put your pampered pooch!! I have to say, honestly I don’t get the point of the Donkey in single mode. Apologies to everyone who scrimps and saves to buy a Donkey, but if you have well over £1000 to spend on a Donkey then I am sure you have a few pounds somewhere to buy another single pushchair. I see no reason, unless you have a dog of course, why you would ever use the Donkey in single mode! I can’t see you stopping outside a nursery, taking one child out, turning it into single mode having left the second seat somewhere? I have to say all the nurseries I worked in had very cramped cloakrooms. Even car seats were discouraged from being left for another parent to be picked up. I am not sure I would leave my Bugaboo Donkey seat behind even if it was allowed!! Sticky, painty fingers get everywhere! But the concept is in the Bugaboo video where the second child having been picked up from nursery magically appears in the second seat.

In double mode though, the Donkey looks beautiful – really lovely! The carrycots look fabulous on, as do two seats, or even one of each. One of the BEST features of the Donkey is that the seats and carrycots now release with one hand. You can click one side of the bumper bar, then the other and the carrycot or seat unit comes off with one hand!! A great improvement. As with the other Bugaboo’s you can choose your tailored fabric when you order the frame. The carrycot covers come over the edge of the frame instead of zipping on inside which is much better! The Bugaboo Donkey carrycots look at first glance much narrower than the Chameleon. Out came the tape measure again. Both Chameleon and Donkey carrycots are the same length internally at 78cms.  The Chameleon measures 32cms wide at the mid point and 33cms wide at the top. The Donkey measures 28 cms wide at the mid point but tapers up to 34cms wide at the top. The carrycots meet EU standards for overnight sleeping and have a breathable mesh inside. We weren’t sure if these are British standards though. The carrycot handle / bumper bar is included.

In seat mode, the tapering of the frame allows for more space at the shoulders where its needed most. I had concerns about the hood being low like my Chameleon and it being uncomfortable for the child. However Bugaboo have taken an idea from the Bee and have added a third wire to the hood which allows it to fold away better. It was easy to move the fabric back to allow a child more head room when the hood was folded back. The fabric actually felt softer and more flexible than I remembered but I was assured it was the same thickness as the Chameleon fabrics. The seat had wonderfully easy adjust straps. A great feature! The seats go in 3 positions parent facing and 2 positions when facing outwards. The reasoning is that you are more likely to have a baby facing you thus needing an extra recline position. The seats measured 28cms along the back seam and 27cms at the front which are comparable to other pushchairs we measured at the Harrogate Nursery Fair Show. The width at the shoulder is 35cms tapering down to 31cms at the hips and feet. The frame length is 87cms. So they aren’t as narrow as they probably look.

The Bugaboo Donkey is 60cms wide in Mono mode and 74cms in Double mode. Part of the advertising hype has been that apparently its the smallest luxury side by side pushchair – but having just come from the 63.5cms wide Mountain Buggy Duet, I have to say it didn’t really wash with me! Not only that, but the flaw in the “smallest” argument comes when you want to add a car seat. One car seat adds 11cms extra to the frame width making it 85cms wide, so two car seats adds a whopping 22cms to the frame making it 96cms cms wide. Even with one car seat on it wouldn’t fit through my local supermarket door and with two seats on, its not a small beastie. Especially considering the same two Maxi Cosi Pebble car seats fit on the Duet frame, admittedly slightly staggered, but I believe without adding (or certainly not substantially) to the width of the Duet. So to add a car seat, you have to buy the adaptor. It’s a U shaped adaptor which comes in both single and twin form (a long chunk of metal!). You can’t add two single adaptors on to make a twin one. The frame takes a Maxi Cosi Cabriofix or Pebble or a Cybex car seat. I have to say despite the width the seats looked very neat side by side, or with one seat and carrycot or seat unit.

The basket is huge and extends as the Donkey extends. I prefer the open basket to the more closed bag of the Chameleon. It was practical and easy to access and had fab little pockets to keep drinks etc in- great! The raincovers go over each seat unit separately. You can get a sunshade which is very like the silver Bee one which was a relief because I rapidly gave up trying to get my Chameleon sunshade to stay on the front of the hood / seat unit. I believe you can get Breezy type canopies too.

I live by the seaside so one of the attractions of the Chameleon was its off roading, 2 wheel sand mode. But in reality it was impractical! You had to take the seat off to swap it round. But with one hand push button, you can kick the wheels underneath and you are instantly in 2 wheel mode….it was sooooo cool!!! I loved it! It was so easy to pull along although admittedly I am sure sand would be more of a challenge especially with two children in it! It was more tricky to kick the wheels back out whilst stood on one leg, but I managed it without falling over!

So, now we come to the HUGE fly in the ointment – the fold!  It’s really clever how the Donkey with the seats or carrycots on, and how it stands up on its own, BUT you need a small van to then fit the Donkey into. Both Leah and I swapped incredulous glances as the woman stood watching our demo asked “is that as small as it goes?” It really was big. It must be at least 40cms deep when folded by the wheels…and quite possibly bigger and that is with no carrycots on! Like the Bugaboo demo video shows, you really need a small hall to keep your Donkey in! I honestly honestly don’t know what car you would need to fit it in, never mind how you will get 96cms worth of babies in their car seats through and around the average shop!  However, you could fold the Donkey chassis down to the mono size which makes the wheel base as small as the Chameleon – but in reality I know I wouldn’t want to be fussed folding it down with two small children in tow. I didn’t get chance to carry the Donkey folded but I bet its awkward with the seats on. I suggest its great if you can leave the Donkey up in your hall with two seats / carrycots on ready to go walking….but I don’t know how practical that is. I expected a really compact fold from an expensive pushchair with the Bugaboo name on it.

The Donkey officially launches on May 1st here in the UK but apparently will be in stores in 2 weeks time in mid April. There is a list of the first exclusive Donkey stockists which on their website. There are only a handful of stores in the UK being given the first batch of Donkey’s and then that will be it until September!