We were delighted when we heard that the Bugaboo Bee³ with its more sturdy chassis, carrycot and extending hood were on the way.
One of our biggest criticisms of the Bugaboo Bee Plus was the wobbly chassis; the lean in the chassis when steering; and having one wheel off the ground when cornering. So the chassis improvements were very exciting.

Thus, we are not going to do a full review here of the Bugaboo Bee3, but rather concentrate on the main differences between the Bee³ and the Bee Plus. Our review of the Bugaboo Bee Plus is here if you need more detailed information on how exactly the Bee chassis, seat and fold work.

We are pleased to report that the chassis on the Bee³ is much sturdier and is much improved. The wobbly and rickety feeling has gone. However, there is still a very slight lean when cornering – but it has been vastly improved compared to the Bee Plus. The wheels have been changed, and the push is beautiful and smooth, although it is slightly heavier. This is a small trade off, and anyone who has not used a Bee before would not notice it. The Bee³ is still very light to push, and we have enjoyed pushing it around. The manoeuverability and handling is excellent.

We do not have a carrycot to try out with the chassis. At £200, we feel this is extortionately expensive for an item which is only used for 6 short months. It will have a resale value though, which may make the price a little easier to bear.
The carrycot consists of a hard black base (£100), onto which is zipped carrycot Tailored fabrics (£100) in black, red, dark khaki or grey melange. The reason why the pieces are separate is so that the fabrics can be washed, which we were told is important for Bugaboo for their carrycots. The Bee³ canopy and rods are used to create the hood. The carrycot fits onto the chassis using adaptors.
The Bugaboo cocoon can still be used for a newborn. The cocoon costs less money, and should last for the best part of the first year – Master BB was a big baby, and he was in his Bugaboo Cocoon until he was at least 10 months old.

But what has happened to the Bugaboo Bee³ seat and sun canopy?!?!?!

The Seat
What we loved most about the Bugaboo Bee Plus, was the quality feel of the seat and the smart canvas canopy. The seat on the Bee Plus was a proper well finishes seat – i.e.  a smart, good quality, tightly fitted, padded, hard wearing seat, which is stitched at the sides. The photo below is of a Bugaboo Bee Plus seat. 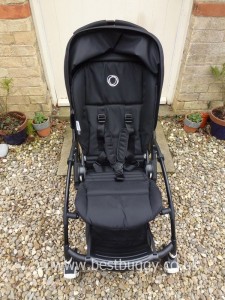 Instead, the Bugaboo Bee³ seat comes as two parts – a hard plastic shell with the harness and lumbar support on; and a seat fabric / liner which is approx 1.5cms thick. (See the bottom of our Bugaboo Bee 3 Photoset here for explanatory pictures). The fabric / liner is attached to the shell using a few button holes and tabs. Just look at how messy the liner looks! This liner is brand new on the pushchair. Look at the creases and the poor fit of the liner around the sides. 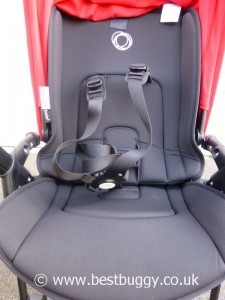 There are photos in the Bee3 photoset above which show clearly that when you move the seat from the extended to the shortest seating position, and then back to the fully extended seating position again, the seat fabric /liner does not always act the same. Our photos show how the fabric / liner is not consistent in how it folds and unfolds. Even full extended, the seat fabric is not flat.
We used to extend the seat fully for Master BB to nap, and then when he woke, we would shorten the seat to the right position for his knees, so that he could put his feet on the footrest. Can you imagine being the child in the seat who has just woken up (extended position seat), who has been sat upright (seat shortened to allow feet onto the footrest), and who suddenly has a liner forming a wedge in their back! How uncomfortable! 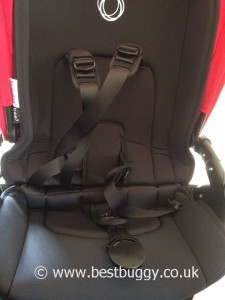 The Bee Plus seat, had stitching lines which neatly folded and tucked away behind the seat, away from the child. when the seat was shorter. In our opinion the Bee Plus seat was MUCH better.

The seat fabric / liner also causes issues when turning the seat around. The seat fabric / liner, in the same way as the Bee Plus fabric, slides between a gap in the seat when folding. However, if the seat is left in the shortest position, there is too much foam padding being pushed through the gap at the rear of the seat. This means that the Bee 3 seat can not be pushed together fully as a clamshell before removing. This means that the white circular rotating parts on each side of the seat, can not fully rotate to properly align. Thus the opening is not clear. 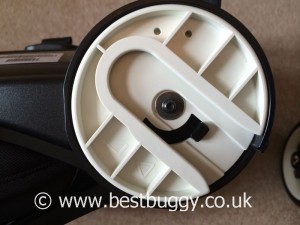 The Bee³ seat will remove with a good tug. However, the seat can not be put back onto the chassis without pushing the foam seat liner back through the seat first and ensuring the circular part is completely rotated. Then the excess seat fabric / liner needs rejigging before use again. Turning the Bugaboo Bee seat around is not simple, and the new seat fabric / liner just causes extra frustration. When the seat is fully extended, there is no problem with the liner as it does not protrude out of the back in the same way.

Last year Bugaboo launched extending sun canopies on their other pushchairs. For babies, extending hoods give additional sun protection and shade. They also give more protection in winter. However, for an older child who prefers to look around, the excess fabric in the extending fold, simply hangs down on top of the child’s head or in their face.  However, the new Bugaboo Bee hoods are really thin, jersey like material. Twice this week, on forums, we have seen the hood fabric likened to “dishrag material” and we at Best Buggy are inclined to agree! The thin, stretchy, fabric flops and sags all over the place, and we know that the fabric unfortunately ‘pulls’ or ‘catch’ easily – we know of one damaged hood after a few days use. The child can poke the hood fabric, or they can push and stretch it out. The hood can even sway side to side which looks really messy. Master BB is usually quite a calm child. However, he was having his own party playing with the hood. We were not impressed! 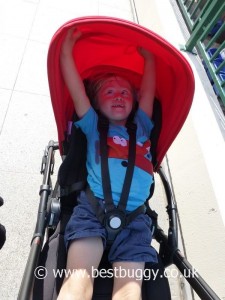 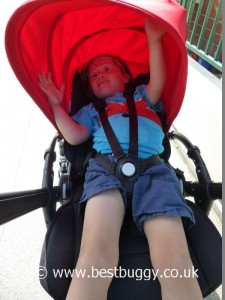 There is no comparison between the quality soft canvas type material of the Bee Plus sun canopy and the new floppy cloth of the Bugaboo Bee³ sun canopy. Thankfully the Bee Plus and Bee³ sun canopies interchange, because if we had not needed to do this review, we would have returned our Bee³ hood, and bought a Bee Plus one. The old Bee Plus hoods come far enough down to shelter an older child in the pushchair seat, although the extra extension of the Bee³ hood may be worth putting up with during the baby phase.

The Bugaboo Bee has a new harness. This is a 5 point harness (which we understand is now necessary for the Australian market). Four individual straps need to be inserted into the buckle. These take a bit of chasing around underneath your child to find – we had to do it with a child who was trying to escape this week, and it was a nightmare to find all the parts and work out how they fitted whilst he tried to wriggle and push his way out to escape. However, all the parts can be inserted individually one at a time which makes the harness easy to do up – there is no need to pair harness straps up before inserting into the buckle, as you have to on other pushchairs with 5 piece harnesses.

We used to see grumbles about the crotch strap being short on the Bee Plus. Thus parents seem to be pleased that the Bee³ crotch strap is longer and sits higher up on the child. However, the compromise to this seems to be that the shoulder straps are very short. We spotted the short shoulder straps on our tiny 4 year old, Master BB, who is still well within the weight limit for use the Bugaboo Bee³. He just had a thin t-shirt on. We knew that with autumn and winter fast approaching, we would struggle to get a winter coat and a footmuff onto our Bee³ and then be able to do Master BB up. We also tried a tiny 18 month old in the Bee³ seat. He had a t-shirt and a thin summer jacket on top, but again the shoulder straps were incredibly short. We sent someone else out with their child to check, and they reported the same too. This is a shame because the Bugaboo Bee Plus was a pushchair which we had always considered to have a generous sized seat for an older child, with a good leg length and footrest. It looks like an older child will struggle to be fastened into the Bee 3 harness in winter.

We love the new more sturdy Bugaboo Bee³ chassis. We like the new wheels, and extra basket space. The push is smooth and grounded.

However why did Bugaboo have to change the two best parts of the Bee Plus – namely the seat and hood canopy fabric?? Quite frankly, having a piece of foam liner which we have to attach onto a bare shell seat, should have reduced the price, not bumped it up. The seat looks a mess – it is creased and ill fitting, even straight from the box. When reducing or extending the seat, the liner folds or sits badly and can be uncomfortable for the child. The liner can also obstruct the seat fitting, making this action even more difficult than it already is. Why is there not a ‘proper’ well finished seat on what is probably the most expensive stroller on the market?

The canopy fabrics are floppy, saggy and look messy swaying side to side as you walk; or as the child pushes, or pulls at them. We don’t like that the fabric can be ‘pulled’ easily. The Bee Plus canopies looked smart and eye catching. In our opinion, the Bugaboo Bee³ canopies are very poor in comparison to any other pushchair hood that we have reviewed to date!

Bugaboo, please bring back the old Bee Plus seat, and the old Bee Plus sun canopies, and give your Bee³ the quality and finish which a stroller costing the best part of £600 deserves. Right now, we feel that the Bee³ is not worth the expensive price tag, especially given the Bee is already a fiddly pushchair to fold and turn the seat around on. We do not understand why did Bugaboo not look to improve the areas which were problematic; instead of altering the elements which worked well, and looked great.
The Bugaboo Bee Plus seat and canopy on the Bee³ sturdy chassis, with longer shoulder straps, would be our perfection.

Best Buggy are very disappointed. We had hoped that the Bugaboo Bee³ would be great for Master BB, but it simply has too many issues. We will be selling our Bee³ instead of keeping it.