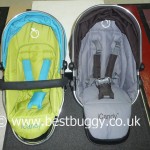 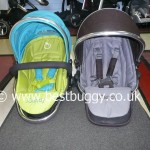 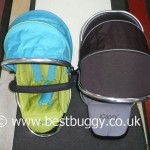 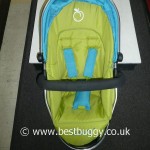 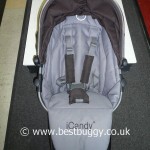 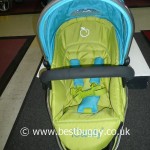 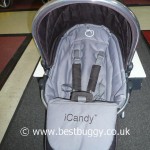 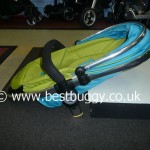 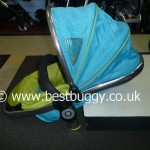 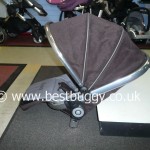 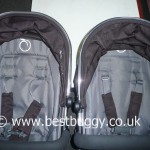 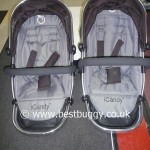 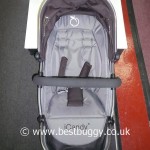 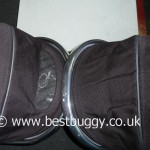 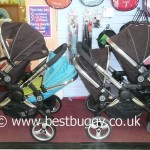 Before I begin on the new Blossom Kit, the Peach Upper seat has already had some recent changes. Two of the three iCandy stockists I visited recently still had the oldest Peach model on display (like the one in these photos). So here is a quick outline of the Upper Seat changes that have already changed:

First of all the old hoods had clear panels. These have now been removed to stop sunlight getting in infants eyes. The old hoods also allow the Peach logo to be seen on the back of the seat liner, but the fabric now covers this partially up. We did set the hoods at the same height and also checked the size of the hood and there seems to be no difference. Also the strap holes are much higher up the liner.

The zips have been removed from the back of the seats to prevent these dangling in the lower child’s face.

The seat liner in the early models used to use velcro to hold them into position. The velcro meant that it was not ideal to remove the seat liner for a larger toddler to allow them more room. The seat liner in the current version is not velcroed in to allow for easy removal, but on the most up to date current models, like the 2011 version here, the seat liner is now zipped into place. Again this can be unzippered for easy removal for an older child. Apparently the seat liners on the Peach will in future be sold separately as an option allowing a variety of personalised combinations, and I guess different colours will probably be introduced at some stage too.

On the inside of the frame there is just one hood zip on the later seat versions. On the early versions there were two hood zippers. I have always loved the way the Peach hoods slide up the chassis to allow for growth. It is possible to unzip the hood at the back to allow for yet more growth (and the hood slides up some more), but this leaves a gap at the back of the child’s neck. To be honest it would be good if a small extension flap could be added in to cover / expand the hood without exposing the child to the bitter winter winds.

The harnesses have been considerably lengthened including the crotch strap (you could get free extended replacement straps from iCandy for the early models but this did not include a crotch strap which remained very small & tight). I have plenty of harness to adjust to strap my 2.5 year old in. Apparently the new Peach has even more adjustments to the waist strap including a free end to the waist strap to facilitate greater adjustment, both smaller and larger.

One of the most noticeable differences is to the bumper bar. The new upper seat bumper bar is now straight, rather than curved.  This was apparently primarily changed to meet US and Australian standards but the new bumper bar allows for better access to the child, and so will be introduced in the UK too.

The Lower Blossom seat is now longer (6.5cms) and wider (2.5cms) than the current Blossom seat and is a similar size to the upper seat. This means that an older child now has a choice of seats, or that older twins will have the same sized seats.

But BEST OF ALL (!!) the lower Blossom seat actually SITS FULLY UPRIGHT!! This was a major issue with the current Peach Blossom as most older babies / toddlers do not tolerate being reclined. This feature, along with the two more equal seat units, will totally transform the market for the Peach Blossom. It will mean that the child in the lower seat will have more room for growth, they can enjoy sitting upright and also the children can swap seats. So the new Peach Blossom lower seat has a three position adjustment instead of the two that it currently has. However in order to make this upright seat safer, there have been a few modifications. The footrest is now a softer fabric formed one, instead of a metal framed one. The footrest and frame have been changed to provide more of a leg rest to enable the child’s legs to relax into the basket more easily.  I have to say this is actually suiting my toddler better as she prefer to ignore the foot rest altogether and to stretch her feet out along the basket length. So having the footrest in fabric instead of a cold metal bar is better for her. The bumper bar has been removed and blanks have been put in position. You can not buy a bumper bar for the lower seat as a spare part. This is a safety feature to prevent entrapment of a child between the seats due to the lower seat now being capable of rotating into an upright position. This also allows for better access to the lower child. It is much easier to lift a child in and out without the bumper bar there.

As part of the current Blossom convertor kit, the user is requested to insert screws into the main Peach Seat to prevent the upper seat reclining too far and to leave an adequate gap between the two seats for the lower child.  iCandy will continue to request that the user inserts screws into the upper seat of the main Peach seat to reduce contact between the upper and lower seat units when in Blossom mode. iCandy have asked me to stress that these should be inserted and should not be removed to allow for a 3rd recline position as it is not safe for your children.

The lower seat unit hood is cut more generously. I have to say in some ways this seems a bit extravagent given you are unable to fully open the hood because of the upper seat. If anything it just creates a bulk of fabric behind the child’s head. I have asked iCandy to look into the positioning of the Peach logo on the back of the upper seat, because the front of the lower seat hood will easily rub the logo off the front seat.

The Upper and Lower Carrycots will now be the same size as the current Upper carrycot ie both will be the same size. This is great news as babies grow out of the current smaller Lower carrycot very quickly (3-4 months) which causes an issue as it is not recommended that a baby moves into the seat unit unit 6 months old. Whilst the Upper and Lower Blossom carrycots will fit into the central position as a single carrycot, they have NOT been tested in this position and SHOULD NOT be used. In single configuration, the main (largest) carrycot ONLY should be used as this is the best configuration for the Peach. To use the product in any configuration other than those specified or recommended by iCandy could affect the warranty.

The Blossom Pip Convertor Bars have been lengthened and modified. This has adjusted the height and position of both the Peach main seat unit and the new Blossom seat unit. It allows for greater clearance between the two seat units and thus allows the lower seat to be rotated into an upright position. The larger space also allows room for two Maxi Cosi Pebble infant carriers as well as the Cabriofix. Another huge advantage of this extra space is that you no longer have to remove the upper seat to put on or remove an infant car seat. This small detail really makes a difference when loading and unloading children from the car.

Already, having used the new 2011 Peach Blossom now for a couple of weeks, it is easy to see how useful the changes are. My toddler can choose her seating position – either upper or lower (whereas before she would have had to go in the upper position). My baby is not straining to sit upright (like his sister did when we got our original Peach Blossom), because he is already in an upright position. It is fantastic to be able to load the children in any order when the baby is in his Maxi Cosi car seat. I like the fact there is no bumper bar on the lower seat. It definitely makes access much easier to the lower child, and also makes it easier for my toddler to get in herself. It also means that the seat units stack really nicely now, whereas before the two seats had different curvatures to them which made stacking them difficult. I really like that you now can unzip to remove the liners to give an older child more seat space rather than the old velcro system. It will be lovely in future to be able to choose a seat liner (or replace a dirty one) for the Peach seats.

I have also asked (and pleaded!) iCandy to consider doing a tandem raincover with the Blossom kit. The current raincovers can be hard to fit and if there is a sudden shower when out and about, you need something you can quickly throw over rather than having to fit two raincovers. Also my toddler doesn’t use the fabric footrest of the lower seat. Instead as I have previously said, she stretches her feet along the basket so that they are straight (and comfortable). A fitted raincover would not cover her legs, and I doubt she would want to bend her feet to sit on the fabric footrest (she also has large feet / shoes which may not easily stay on the ledge anyway). You would still get a single raincover with the single Peach. I know iCandy are looking into this, but at present feel that single raincovers allow for flexibility of seat / carrycot combinations.

The Peach basket has been lengthened slightly to accommodate the larger Peach Blossom carrycot in the lower position, and also to allow room for the Pebble car seat to fit onto the lower position on the pip convertor. iCandy will be implementing a change to the Peach chassis to enable models manufactured prior to the new Peach Blossom launch to be fitted with the new Pip2 converter bars and there is the possibility of modifying units should customers require it.

So although the changes to the Blossom Kit seem minimal ie a bigger / same sized seat unit, longer Blossom Pip convertor and the same size carrycots, these changes will totally transform the Peach Blossom’s usefulness, longevity and practicality. The Peach Blossom is very light to push with two older children in it, and the Peach really will Blossom into the fantastic tandem that it should have been from the start. Having tested out a number of the top tandems on the market, I truly believe the new 2012 Peach Blossom kit will take one of the best and most stylish single pushchairs on the market, and will transform it into the most practical, easiest to push and quite simply the best tandem pushchair to take your family from birth to three. I would highly highly recommend the new 2012 Peach Blossom to anyone.

With many thanks to The Baby Depot, Hull for allowing us to photograph the current Peach seat units in their shop.